Skip to content
Home / Delve into the Depths in the Kobold Blog / Howling Tower: Off-the-Cuff Adventures 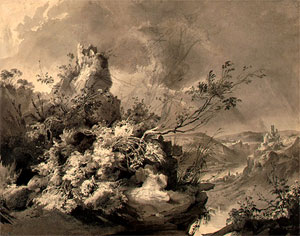 My first efforts as a DM were with published D&D adventures: D1–3, Descent Into the Depths of the Earth, Shrine of the Kuo-Toa, and Vault of the Drow. We bombed through the series in two marathon sessions.

Those adventures produced great moments and great memories. I still shudder, however, when I think about some of my rookie DM mistakes.

Most of my errors came from a lack of preparation. I made the mistake of believing that because I had page after page of professionally produced adventure material, my work was already done. I’d read the adventures beforehand, but not in great detail. I had the gist of it and assumed the rest would flow naturally from quick checks on the fine points during play.

I was wrong. Two problems came up repeatedly.

The first was information going unused. Players raced through certain areas and encounters that the adventures laid out in great detail and skirted others entirely. Sometimes I’d forget that the adventure included extra detail on a location or encounter and narrate right past it in my desire to keep things moving.

The second was that the details covered by the printed material often were not the details my players wanted, and I was at a loss to fill in quickly. What had seemed important to the author, playtesters, or developer wasn’t vital to my players, and what my players considered significant either hadn’t occurred to the publishers or had been deemed unimportant.

Because of that experience, I developed a disdain for published adventures beyond the simplest dungeon crawls. They seemed to be a no-win proposition. If an adventure was short and breezy, then it couldn’t cover all the bases and the DM wound up finishing the work that he thought he was paying someone else to do. If an adventure described every room and corridor meticulously and covered every contingency, then the weight of all that information overwhelmed the DM. He’d either forget to use half of it or the game would slow to a crawl as he constantly flipped pages to be sure nothing was missed.

The obvious answer was to create my own adventures. My experience with the D series had shown me that much of what I planned and put down in writing would go unused, and I’d still need to make things up on the spot to fill gaps. So why do all that planning? Making everything up on the wing would be more efficient.

It’s a tribute to hubris that I DMed that way for a long time. I thought I was good at it. But eventually, I detected signs in my players that these off-the-cuff adventures weren’t as solid as I thought they were. I played campaigns and one-shots where it was painfully obvious that the DM was flying by the seat of her pants, and the airplane was either coasting on fumes or lost in the fog. I wasn’t like that . . . was I?

Yeah, I pretty much was. It’s no fun admitting that you’re not Robin Williams, but he’s one of a kind. My make-it-up-as-you-go adventures were OK but nothing more. Aside from an occasional flash of ad-libbed brilliance, they were flat and uninventive. Not bad, in my subjective opinion, but not great, either. And if we’re not shooting for great, then what are we aiming for?

On the fly, I’m good at adding fine details such as how a poison makes a character sick, how a lock needs to be manipulated to avoid setting off a trap, how a monster arranges its lair, or what the characters find when they poke through a dead man’s pockets. I’m good at adding twists to a plot in reaction to the characters’ actions. I’m good at saving time by fudging monsters instead of looking up ACs and attacks, and at giving monsters and NPCs personality so players want to interact with them in ways other than murder. I’m good at adjusting the lethality of a battle turn-by-turn to maintain dramatic tension.

I’m not good at spinning an interesting plot from scratch; it will start well but then either splinter into too many red herrings or flop onto a gradual downward slide that ends in a watery splat instead of building to a dramatic climax. I’m not good at generating puzzles on the fly; they all collapse into stepping on the black squares instead of the white squares. I’m not good at reacting to players who do the unexpected in mundane ways; I can handle them doing something outrageous or mistakenly turning onto a side path, but when they doggedly pursue a seemingly logical course of action based on complete misunderstanding or misinterpretation of the clues, it throws me off balance.

The key to winging it lies in honestly appraising your strengths and weaknesses. Don’t depend entirely on your assessment. After an adventure, ask players what floated and what sank. Ask them in a group around the table, and ask again later one-on-one if possible, because you’ll get different answers.

Let your strengths carry themselves, but cover your weaknesses in advance. It’s not as easy to do as it sounds. We’re drawn toward what we’re good at. When scribbling down notes for an adventure, your mind naturally conjures up the elements that it’s good at conjuring up. Even if you write down all of those ideas, you’ll probably come up with better ones in the moment of the game.

Your weaknesses are where the work needs to be done beforehand. Don’t kid yourself that it won’t be work; done right, it will be. The good news is that the more you exercise that muscle, the stronger it gets. Ideally, players won’t be able to tell the difference between what was premeditated and what was done in the heat of the moment.