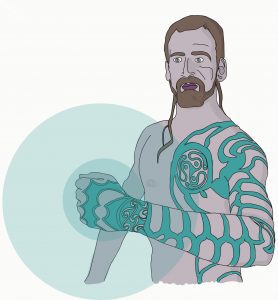 The gauntlet witch archetype first appeared in Kobold Quarterly #23, offering a vibrant alternate option for playing a witch. Though gauntlet witches are rare, your players may want to follow a variant path than that presented already. This series offers variant racial archetypes based on the gauntlet witch for humans, gearforged, huginn, kobolds, minotaurs, dragonkin, gnolls, elves, dwarves, tieflings, goblins, dhampir, aasimar, and darakhul as well as two new prestige classes accessible by gauntlet witches. Again, note that the volume of options here should not be taken as an indication of the prevalence of gauntlet witches in Midgard, merely the availability of options you might provide to your players.

Inked in an arcane ritual of blood and pain, the tattoo gauntlet traps a sentient spark of the essence of a particular patron or sometimes a mote of the soul of an outsider—bonding this essence into a living envelope inscribed onto the body. Tattoo gauntlets were created by inkmages in association with gauntlet witches wishing to both prevent the loss of their eldritch gauntlet and conceal the source of their fearsome power—however the resultant creations, though sentient, were considered brutal caricatures of truly intelligent eldritch gauntlet designs. Thus the  “intelligent gauntlet linked with wearer” was replaced by an intimate bond of witch and tattoo—information and versatility traded for raw physical power and protection.

At 5th level the ink spreads to cover the spaces between the plates, increasing the protection to that of scale mail.

Note that armor or shields of any sort are anathematic to tattooed gauntlet witches, and interfere with arcane spellcasting as normal.

A witch’s tattoo gauntlet otherwise functions as and replaces the witch’s familiar and 1st- and 4th-level hexes.

At 14th level the tattoo can be completed (again in exchange for the hex ability usually gained), covering the witch and conferring protection equal to full plate.

Sapience: A tattoo gauntlet is still a sentient “item” and has the same Wis, Cha, and Ego scores of a regular eldritch gauntlet. A tattoo gauntlet’s Intelligence score starts at 8, though, and it increases by 1 for every two levels. The tattoo gauntlet begins play knowing the Trade tongue and the tattooed witch’s native human language.

Bloodbond: The tattoo gauntlet does not have the lore, legend lore, telepathy, unbreakable, or teleport abilities associated with an eldritch gauntlet. It communicates via empathic pulses (Empathy [Su]) that only the owner understands or feels. The tattoo gauntlet otherwise shares the owner’s senses and saving throws. Note that the tattoo gauntlet cannot be blinded or deafened in and of itself—these conditions only affect it if the owner is likewise affected.

Armored Fist: At 1st level the tattooed gauntlet witch gains Improved Unarmed Strike as a free bonus feat. At 8th level, he gains Vital Strike, even if the witch does not meet the prerequisites. Both of these feats apply only to attacks made with the tattoo gauntlet.

Toughness: The tattoo gauntlet confers this feat upon the owner at 3rd level.