Skip to content
Home / Delve into the Depths in the Kobold Blog / Tome of Beasts: Goat-Man 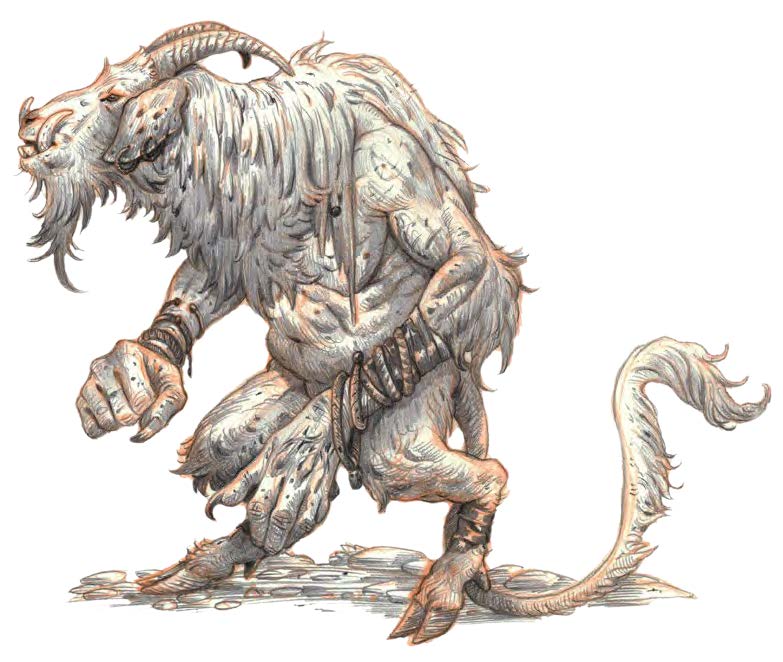 This hunched, man-like figure lurches with a strange, half-hopping gait. Tattered clothing hangs from its muscled shoulders, and its legs are those of a ram, ending in cloven hooves.

Trespassers on the Rites. The first of the goat-men was the victim of a powerful curse intended to punish him for spying on magical rites exclusive to the women of his tribe. Admiring the grotesque result, the Black Goat of the Woods with a Thousand Young adopted him as its servant and ensured that all who committed the same taboo fell to the same curse, and thus into the Black Goat’s service.

Bleating Speech. A goat-man’s head is tusked, adorned with curling ram’s horns, and its beard often drips with gore. Rows of transparent, needle-like teeth fill its mouth; these teeth are malformed and make clear speech impossible for goat-men, though they understand others’ speech perfectly well.

Serve Foul Cults. Cultists of Shub-Niggurath or the Black Goat in good standing are sometimes granted the services of a goat-man. The creatures guard ritual sites, visit settlements to capture or purchase suitable sacrifices, and perform certain unspeakable acts with cult members to call forth ritual magic.

Headbutt. If the goat-man moves at least 10 feet straight toward a creature and then hits it with a slam attack on the same turn, the target must succeed on a DC 14 Strength saving throw or be knocked prone and stunned for 1 round. If the target is prone, the goat-man can make one bite attack against it immediately as a bonus action.

Multiattack. The goat-man makes one bite attack and one slam attack.