Skip to content
Home / Delve into the Depths in the Kobold Blog / Tome of Beasts: Dogmole Juggernaut 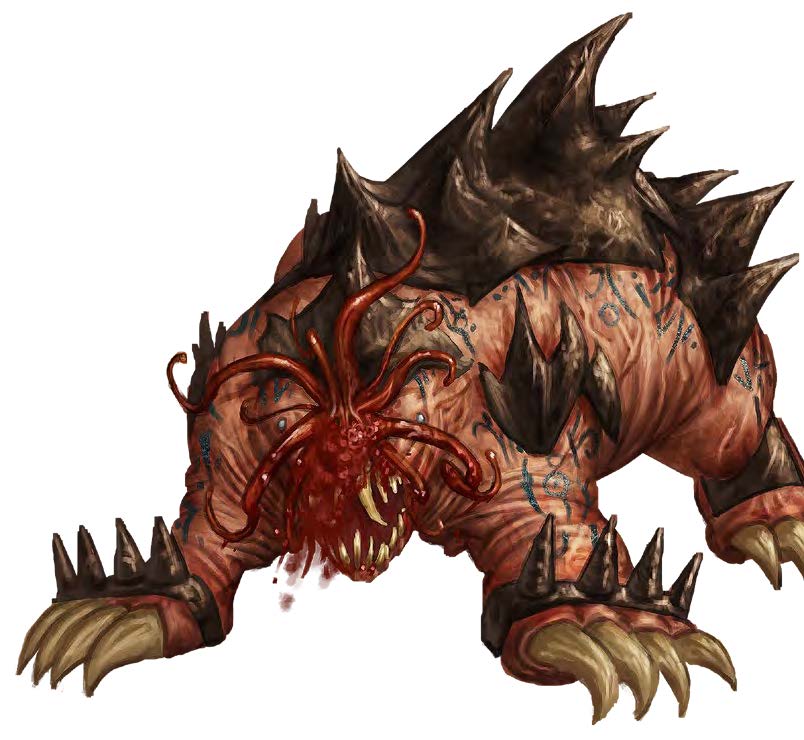 Hide armor and scraps of mail are nailed onto this scarred and tattooed mole-like beast. A ring of tentacles sprouts above its mouth, which is dominated by spade-like incisors. The beast has no visible ears and only tiny, cataract-filled eyes. Blood and foam fleck from its tentacled maw.

Grown from Chaos. What the derro have done with certain breeds of dogmole almost defies description, but the secret of their size is a steady diet of chaos fodder, magical foodstuffs and spells that force the creatures to grow and grow.

Scarred and Abused. Brutalized from birth and hardened by scarification, foul drugs, and warping magic, the dogmole juggernaut is barely recognizable as a relative of its smaller kin. A furless mass of muscle, scar tissue, and barbed piercings clad in haphazard barding, a dogmole juggernaut stands seven feet tall at the shoulder and stretches nine to twelve feet long. Its incisors are the length of shortswords.

Living Siege Engines. Derro use dogmole juggernauts as mounts and improvised siege engines, smashing through bulwarks and breaking up dwarven battle lines. When not at war, derro enjoy pitting rabid juggernauts against one another in frenzied gladiatorial contests.

Burrow. Dogmole juggernauts cannot burrow into solid rock, but they can move through softer material like soil or loose rubble, leaving a usable tunnel 10 ft. in diameter.

Ferocity (1/Day). When the dogmole juggernaut is reduced to 0 hit points, it doesn’t die until the end of its next turn.

Powerful Build. A dogmole juggernaut is treated as one size larger if doing so is advantageous to it (such as during grapple checks, pushing attempts, and tripping attempts, but not for the purposes of squeezing or AC). It gains advantage against magical pushing attempts such as gust of wind or Repelling Blast.

Wormkiller Rage. Wild dogmole juggernaut packs are famed for their battles against the monsters of the dark caverns of the world. If a dogmole juggernaut draws blood against vermin, purple worms, or other underground invertebrate, it gains a +4 bonus to Strength and Constitution but suffers a −2 penalty to AC. The wormkiller rage lasts for a number of rounds equal to 1+ its Constitution modifier (minimum 1 round). It cannot end the rage voluntarily while the creatures that sent it into a rage still live.

Multiattack. The dogmole juggernaut makes one claw attack and one bite attack.