Skip to content
Home / Delve into the Depths in the Kobold Blog / Ishard: A Fifth Edition Item 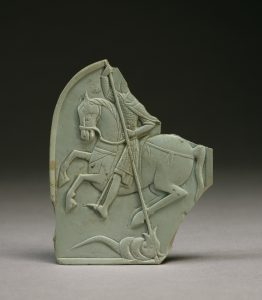 A long time ago, Keretlir the Beauty, the Supreme Queen of the High Elves, sacrificed her life in battle against Sshtlinar, the ancient white dragon who invaded her forest kingdom. The high priest could not revive his sovereign because of a horrible curse bestowed on her by the dying monster, but nonetheless he instilled her deep love for the subjects of the realm in a magic spear of great power. From that day, Ishard has protected elves from white dragons and other ice horrors.

This weapon has a shaft made of polished boreal birch inlaid with silver and a mithral tip. Its entire length is decorated with ice crystals made of pure blue tourmaline.

You gain a +3 bonus to attack and damage rolls made with this magic weapon. The spear has also the Elf and Sentinel special features, so it weighs only 1.5 lbs. and glows faintly when dragons are within 120 ft. of it. It has the following additional properties.

Ice Walk. While you hold the weapon, you can move across and climb icy surfaces without needing to make an ability check. Additionally, difficult terrain composed of ice or snow doesn’t cost you extra movement.

Polar Explorer. While traveling for an hour or more in an arctic terrain with Ishard in your possession, you can move stealthily at a normal pace. Moreover, while tracking other creatures, you also learn their exact number, their sizes, and how long ago they passed through the area.

Winter Bulwark. While you hold Ishard, you have resistance to cold damage.

Sentience. Ishard is a sentient lawful good weapon with an Intelligence of 15, a Wisdom of 13, and a Charisma of 14. It has hearing and normal vision out to a range of 60 feet. The weapon can speak, read, and understand Elvish, Common, and Draconic. It has the voice of an ancient and severe elf queen, but sometimes it sings melancholic love ballads.

Personality. The purpose of this spear is to protect elves against dragons and other monsters of the cold environments. Conflict arises when the wielder fails to defend elves from destruction, death, and ecological disasters.

Ishard has an authoritative approach and expects the best effort possible from its wielders (it was a queen accustomed to be obeyed, after all), but its true feelings are strongly tied to the highest ideals of self-sacrifice and a good-ruled community. Its only secret flaw is its envy for living people: this because its heart was broken when King Kar-Keret remarried after the transformation of his beloved queen into a sentient magic item.