Skip to content
Home / Delve into the Depths in the Kobold Blog / Beyond Mapping: Building 3-D Gaming Environments 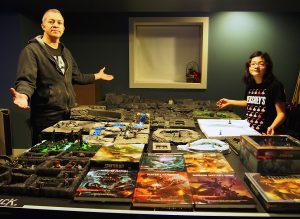 Recently, as part of an effort to teach skills that would be useful in designing video games, Todd Morgan Shirley embarked on a project with his daughter Reina Yoneyama Shirley: teaching her how to play D&D. Todd believes that beyond the fundamental game theory a player and/or DM gains from D&D there are numerous transferable benefits: vocabulary, character and game design, statistics, good note taking, introduction to psychological archetyping, modeling, art, math, common sense development, and performing art—to name a few. Reina took to the idea, and the two began painting miniatures. Then, after some discussion with her friends, they put together a small group to play the fifth edition D&D starter set. Wanting to make sure everyone had a great experience, they decided to go beyond mapping on graph paper or battle mats: they started building 3-D tiles/dungeons.

After some quick research, they discovered that it would not be affordable to build 3-D environments as well as they had envisioned. Reina had taken classes on making dioramas that used recycled materials. So, working with that idea as a foundation, they went online to research the various methods to do this well. The two went all in, and they are in the process of producing terrain, caves, buildings, and dungeons for the campaign, The Lost Mines of Phandelver. During their Christmas 2014 celebration, Reina received gifts of the more advanced books: PH, DMG, MM, and the Hoard of the Dragon Queen and Rise of Tiamat. So, they are going to go through everything eventually.

They both wanted to share the results of their efforts with the Kobold Press public. Take a look at what these two have crafted together!

All of their material at the beginning of 2015. On the left are some of the ruins at Thundertree. Above that is the cave for the Goblin Ambush encounter. To the right are various environments where the players store their miniatures when not in play, and in the rear is the Wave Echo Cave. 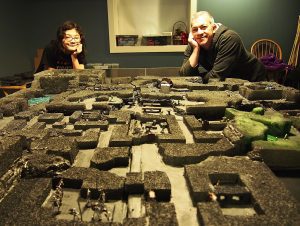 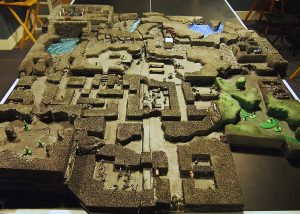 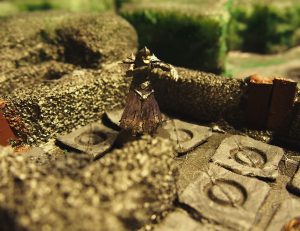 A booster pack miniature of a wraith from Wizkids. 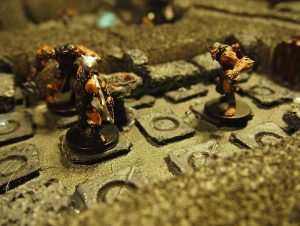 Wizkids bugbears from Icon of the Realms miniatures. 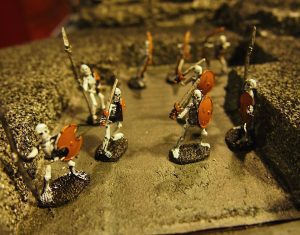 The two have more miniatures and models now, and their collection will grow until they have a complete set for all three campaigns: The Lost Mines of Phandelver, Hoard of the Dragon Queen, and Rise of Tiamat. The materials they used are heavy-duty cardboard, Styrofoam, hot glue, craft paint, aluminum foil, and other affordable materials. Most of the cardboard and Styrofoam is obtained from local businesses. Todd simply explained what they were doing for the local kids, and the businesses were glad to accommodate them with these materials that would otherwise go to recycling.