Skip to content
Home / Delve into the Depths in the Kobold Blog / Midgard Legend: Titus Patrascu, Fallen Paladin of the Moon Goddess 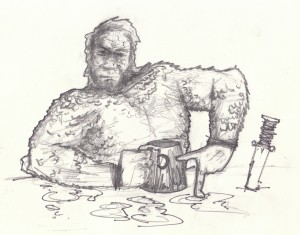 As some of you know already, the Midgard Tales Kickstarter met its funding goals on Sunday! If you haven’t already seen what’s in the works for that, you can visit the Kickstarter page and find out. Thanks go out to all those who kicked in funds, and we’re looking forward to seeing what marvelous adventures come out of this effort. (If you missed out on the Kickstarter, watch the blog for an update that includes a link to the Kobold Store!)

And now, to celebrate successful funding, we bring you a Midgard Legend. Welcome, Titus Patrascu, to the lore of Midgard.

Born during a lunar eclipse while still bearing his caul, which is a sign of the Moon Goddess’s blessing, Titus Patrascu was always destined to achieve greatness. As the child grew into a striking young man, his extraordinary physical strength and great endurance became obvious, and he soon entered the service of Hecate as one of the Eyeless, her divine order.

Titus exemplified bravery, fighting prowess, and leadership skills during his time as a paladin. He defeated the minotaur general Baruch Gildhorn in single combat, thus bringing a bitter border skirmish with Capleon to a swift conclusion after Titus blinded his foe with the general’s own sundered horn.  Titus then rescued the priestess Balbina Ruso from being gored by a huge ghost boar in the Ringwood, using nothing but a small dirk and a witchlight mushroom. Hecate favored him in omen and blessing, allowing him to become the youngest recorded First of the Eyeless, and leader of the holy armies of Kammae Straboli against her rivals in the Seven Cities.

But no deed exceeds his glorious capture of the god Nethus. Heedless of his own safety, Titus leapt onto the back of the King of the Sea, wrapping the divinely kissed chains of the Moon Goddess around the god’s protean form while Hecate’s priestesses chanted their terrible ritual of enslavement. Once the god lay bound and prostrate, the priestesses demanded that none discover the means of the Wave-lord’s imprisonment, lest this secret somehow lead to his freedom. The Eyeless and the Unchanged-But-Ever-Changing Cabal manufactured a lie; Nethus impaled Titus on his trident as Hecate’s champion struggled to chain him, and he died a hero’s death from the wounds. The devoted paladin agreed to the fabrication and vanished into secret exile, awaiting the call of his goddess’s servants.

That was many years ago. Since then, Titus’s once lofty ideals and paladin code have languished behind the facade of “Otho Greyhair,” a wandering sellsword willing to serve any banner in Midgard. Every engagement has lacked any sense of holy purpose: fighting the Ironcrag Exiles in Latorne, hunting down outlaws in the Northlands to take tongues, and driving a clan of thieving Kariv gypsies from a baron’s land on the flimsiest of pretexts. The years weigh heavily, and the work has been hard to stomach. Titus drinks heavily as he struggles to accept his life’s direction. He daydreams of serving his goddess once more, striking down her foes while channeling her terrible glory as he rides with the host of the Eyeless. His drunken rancor makes him even less attractive to employers looking to avoid rabblerousers; he typically wins a contract by challenging the recruiting officer and two lackeys to a free-for-all, bare-knuckle brawl, proving his ability but winning no friends and rarely securing anything long-term.

For years now, Titus has dodged the handmaidens of Mnemosyne, whose agents hear whispered rumors that he still lives. They scour Midgard for him, rightly believing he knows how Nethus might be freed. Fortunately, Hecate’s last gift to him holds steadfast, and Titus remains cloaked from any divination except the prying eyes of other gods of Midgard.

This dark and questionable tavern on the backstreets of Tintager’s Old Quarter serves as a gathering place for sellswords, warmages and tiefling sorcerers arriving to fight against the elves of the Arbonesse. The pub’s tense atmosphere means bloody fights are as likely as friendly illusory duels. It takes its name from the bundle of captured officer’s batons kept over the back of the bar, and countless battered war trophies hang from the rafters. Mercenaries deploying to jobs traditionally leave small notes stuck to the walls with sealing wax, removing them only when they return safely. Countless scraps of parchment remain.

Titus can be found here, dressed in a rough chain shirt and drinking himself slowly into a stupor in an alcove while ranting about how “devotion to a cause is a fool’s game.” Now in his mid-sixties, he looks nearly two decades younger, having kept himself fit through fighting and immunity to disease. Bitter and surly, he trounces any challenger wanting to arm wrestle for coin. Most know better and send fresh fools to be brutally savaged when they want a cruel laugh or feel stupidly confident on liquid courage. Only the bravest dare ask him what he means when he talks about pretending to be dead . . .