Skip to content
Home / Delve into the Depths in the Kobold Blog / The Simple (Yet Epic) Eleganceof Bruce R. Cordell

If you’ve played Dungeons & Dragons at all in the last decade, you’ve probably run into Bruce R. Cordell’s work. And if you’ve used his gaming books or run his adventures, you’ve probably noticed that there seems to be some larger—some epic—arc connecting it all.

If you’ve ever met him at a con or online, you probably think he’s a pretty nice guy. He seems as much, anyway.

“My personal theory about Bruce,” said Mike Mearls, co-designer of Iron Heroes and a lead developer on Dungeons & Dragons 4th Edition, “is that he comes off as a nice, low-key guy, because he wants to save all the scary weirdness in his head for the monstrosities he unleashes on the gaming world.”

Cordell got his start at TSR, Inc. in the late 1990s and has contributed to D&D’s 2nd through 4th editions. He is perhaps best known for his development of the multiple planes of the D&D cosmos and of psionics (the psychic power source).

Most recently, Cordell has worked as the lead designer on The Forgotten Realms Campaign Guide, Draconomicon I: Chromatic Dragons, and Open Grave: Secrets of the Undead.

On July 7th on the Dragon Web site, he will tell a little bit of the story behind psionics in 4th edition, but Kobold Diplomats have a way of poke and prodding and getting a few tidbits early.

Jones: In an interview with Monte Cook, you describe the switch from 2nd to 3rd edition as “a vital operation required to resuscitate an endangered brand” and as “a heart transplant.” Similarly, how would you describe the switch to 4E?
Cordell: The update to 4th edition wasn’t required to save D&D like the switch to 3rd was by any stretch of the imagination. Which meant that trying to come out with a game that was demonstrably better than 3rd was going to be a pretty big challenge. But it had to be that, or who would switch? We went through three major rule evolutions (I was on the team working on the 2nd rule evolution), with countless minor iterations before we finally achieved a game that we felt hit the target.

3rd edition was a wonderful evolution of the game that brought people back to the hobby in droves. 4th edition builds on all of 3rd edition’s great strengths, while jettisoning problematic rules and methods of creating rules (and monsters) that weren’t really adding anything to game play — and were actually subtracting from it.

For instance, I can recall many 3rd edition games where I was sitting at the table waiting for my turn to come up only to be told “You’re still stunned/asleep/turned to stone.”

One of 3E’s great strengths was a unified d20 mechanic that tied (and ties) the game together quite nicely. Another was the skill system, which 4th Edition retained but simplified. Of course, you can’t list 3rd Edition’s triumph without noting the feat system!

Jones: In what ways does 4th edition capture the spirit of the D&D you cut your teeth on?
Cordell: 4th Edition D&D has, from a DM’s perspective, a simple elegance that makes running a game a breeze and a joy. No more meticulous monster or NPC stat creation processes that made dungeon prep a chore (at least for me), no more looking at a monster with 20 spells and finding the one it will actually use in the approximately five rounds of life it will enjoy once the player characters encounter it, and so on. 1st edition had a similar elegance, in that when I started playing, it wasn’t weighed down by cruft.

Jones: Now that the Core set and a handful of supplements are out, are you seeing many holes that you’d like to patch?
Cordell: For starters, there are several power sources that want to see supporting characters, such as the psionic power source.

Jones: Okay, since you brought it up, what’s the deal with all the psionics?
Cordell: What, you’ve seen my license plate? (Ed. I have — and it reads “PSIONIC”!)

I think I just sort of fell into psionics because when I wrote a book called the Illithiad a while back (under the regime of 2nd edition D&D psionics rules), I happened to write a couple “rules patches” to the system that sat better with me. Folks remembered that, and when the time came for 3rd edition psionics, I was asked if I wanted to take the lead. Of course, I said yes.

Anyhow, for me psionics adds a story element to the game that serves as a nice foil to arcane magic’s standard stories. It’s not that psionics are better, it is that the power source is different, with a different origin, and subsequently different possibilities for characters who use it.

If the time comes that psionics enters 4th edition, I can tell you right now that it is the story behind the power source that will inspire the design of the various classes that might use psychic strength to overcome their foes.

Jones: Can you expand on that a little?
Cordell: The reason psionics has entered the 4th Edition world has a story behind it, which we developed first. With a story to support the psionic power source, certain class features, paragon paths, and even epic destines for psionic character classes suggested themselves that wouldn’t have otherwise occurred to us.

Also, the psionic classes will veer somewhat away from the standard way powers are used by other power sources, but still works very well within the overall system. This will demonstrate the robustness of the 4th Edition exception based design philosophy. It could even end up giving us a chance to really play with the base 4th edition rules and show how it really, truly is exceptions based.

Jones: Do you have any advice for DMs struggling with psionics?
Cordell: Wait until the PHB that features psionics comes out and take a look and see what you think about the latest iteration!

Jones: Out of all the gaming products you’ve worked on, is there one you are the most proud of? Why?
Cordell: I think maybe Libris Mortis (whose 4th edition iteration is Open Grave) because I created a whole swathe of completely new undead monsters that seem to have stood the test of time. For instance, many of them appear in Byers’ Haunted Lands trilogy. 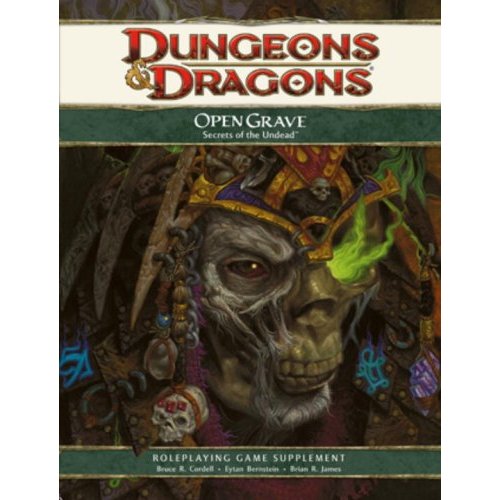 Jones: What was your role in Open Grave: Secrets of the Undead with Eytan Bernstein and Brian R. James? What’s your favorite undead from Open Grave? Which of the undead in this book would you most or least like to go up against?
Cordell: I was lead designer for Open Grave, which means I created the outline, assigned page count to the freelancers, served as a touchstone during the process, and stitched everything together (including my own writing contribution) at the end, which includes an art order.

I don’t have one favorite new undead in Open Grave, but I do really like the brain in a jar, which was a monster I created for an older book of similar theme (Libris Mortis).

I think the scariest monster to face as a player would be a well-DM’ed forsaken shell. Mike Mearls tells the story of how he had this animated skin of a murdered humanoid attempting to choke one his players by getting the drop on him and smothering him beneath its undead expanse. Ick!

Jones: Some of your most exciting adventures, such as Death’s Reach, are for higher level characters. What is it about the epic tier that sparks your creativity?
Cordell: I’ve always been sort of an “epic” adventure writer — the very first published D&D adventure I wrote introduced the threat of a “far realm” leaking insane influence into reality, and the one after that — at least in writing order, though not publication — was Return to the Tomb of Horrors.

I guess when you can reach as far as you want, creativity isn’t constrained by limits lower level play would require.

In Death’s Reach, players discover that the rules of cosmology, specifically those that govern the destiny of dead souls, are not as hard-wired into the universe as they might have hoped. Structural disturbances are propagating and becoming disruptions in the framework over which the Raven Queen should preside. The characters get an opportunity to smooth out that disturbance, and in the process discover a few more interesting, ancient secrets regarding the history of the D&D cosmos.

Jones: I loved your first novel Oath of Nerull, written under the house name T. H. Lain. But Plague of Spells… it’s in a whole other league! How has years of writing game material impacted your fiction writing?“> 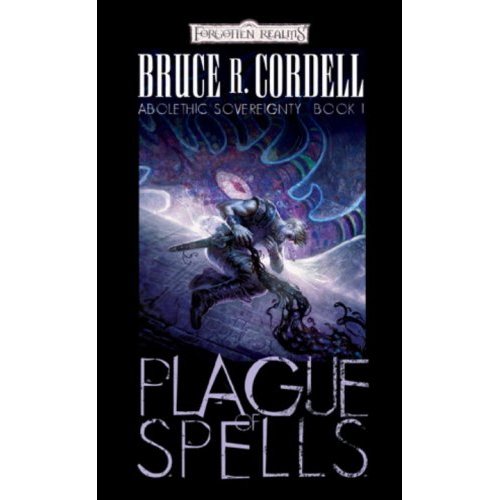 Cordell: Wow, that’s very kind of you to say, thanks!

Years of game writing has improved my writing, thanks to feedback from editors and practice.

However, novel writing was a whole new game. I realized it was a craft that would require even more effort in mastering the “elements of style.”

I learn something new every time a write a novel, and I can hardly go back and look at my older novels without being sad I didn’t know then what I know now. Luckily, I have a fabulous editor whose instincts are sound, and whose advice and directives I’ve learned to take to heart.

Jones: Stardeep is more of a dungeon crawl than your other novels. Was writing this stand-alone for the Dungeon series… relatively confining?
Cordell: I didn’t find writing Stardeep confining because it’s been my conceit to lightly connect every Forgotten Realms novel I write with the preceding one and provide potential linkages to the those that might follow. So, even though Stardeep is putatively with the Dungeons series, if one were to read all my novels independently, one would discover recurring characters (Ususi appeared in Lady of Poison and Darkvision; Kiril appeared in Darkvision and Stardeep; Raidon Kane appeared in Stardeep and Plague of Spells; and so on). Actually, more than anything, Stardeep serves as a prequel to the Abolethic Sovereignty trilogy.

Over the last couple of years, my novel writing has impacted my game writing more than the other way around. The color and life I try to bring to my novels can find just as loving a home in the pages of a game book.

Like our interview with Mr. Cordell? Check out the Open Design podcast interview with Cordell, wherein he discusses his start in the business, horror design, and the Far Realm.

3 thoughts on “The Simple (Yet Epic) Elegance<br />of Bruce R. Cordell”