Skip to content
Home / Delve into the Depths in the Kobold Blog / Deadly Harmony: Not Your Average Herd 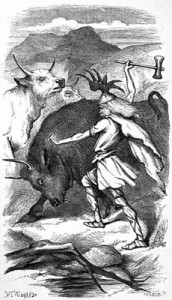 The practice of domestication is older than civilization. To date, mankind has tamed what your adventuring group would consider to be rather tame creatures. In the Pathfinder Roleplaying Game, however, those with talent, interest, or need can domesticate much more dangerous creatures. Factor in exotic races with unusual dietary and cultural needs, and you could have many forms of domestication that range from the outright bizarre to the absolutely deadly in your campaign.

Although most adventurers can regale you with tales of goblins and their disgusting goblin dogs or discuss drow and their creepy spider pets, some can tell of an intelligent race that has domesticated nonintelligent creatures for agricultural purposes. This set of combinations provide you with a pair of interesting encounters that let the players see the world as more than a place where monsters live only in tunnels or lairs. Take a look at some potential roleplaying encounters or deadly combats that can show players just how dangerous a stampede could be to their characters.

Gorgons are creatures with iron hides, mean tempers, and a breath weapon that can render flesh and blood to solid stone. What is of interest, however, is the multitude of economic things that gorgons provide. Depending on the breed, a gorgon’s armor plating can provide refined metal that can be used to manufacture metal items — particularly armor. Their meat is tough, but filling, and it has become a favorite among some exotic chefs. Their dung contains metals and gemstones, and because they eat stone, shepherds sometimes raise gorgons to graze on mountainsides, where these creatures can process precious gems and ore without the need for mining. Lastly, their horns provide valuable material components to spellcasters who need to add an element of the gorgon’s magical toughness to their magic. These factors combine to make a high-risk but high-profit herd animal that can make a successful farmer and breeder very wealthy indeed.

Prospective farmers require a tireless guardian that can handle the rigors of gorgon farming while protecting the beasts from poachers or predators that seek an easy meal in the form of a gorgon’s calf. Enter the iron golem. Not smart enough to consider betrayal and tough enough to handle anything an angry gorgon can inflict on it, iron golems are an expensive but worthwhile investment to wealthy gorgon farmers. Add to the fact that they are naturally immune to the gorgon’s breath weapon and the iron golem serves as an excellent shepherd to a herd of gorgons. Characters might encounter such a dangerous shepherd and its exceptionally dangerous herd in the mountains while crossing through a gorgon farm or after being sent there to capture gorgons for a wealthy buyer. Perhaps they find a wild herd of gorgons that are protected by a rusty iron golem whose master has long since stopped tending to them. The CR presented is for one iron golem, three gorgons, and a single gorgon calf with the young template.

Typically, hill giants have little interest in agriculture. Preferring to raid villages, towns, or fields to gather what they can eat from others, most hill giants don’t have a use for animals that take up space and eat food. Some hill giant tribes, however, attempt to exist peacefully with neighboring towns or are too far away from everything to make raiding practical. In these cases, hill giants might start raising boars.

Dire boars are hardy creatures that are relatively easy to care for, and they’re of the right size for hill giants to make several tasty meals from. These creatures are also more than capable of defending themselves when necessary. Some hill giant clans breed dire pigs in an attempt make them fiercer (granting them the advanced template), while other creatures have been bred to be fatter and more docile (taking a -2 penalty to attack rolls and damage rolls). Some breed their pigs for immense size (adding the giant template).

Characters could encounter hill giant farmers and their charges in any number of circumstances. They might meet them peacefully on the outskirts of a large town or perhaps their encounter is more violent in nature. In nearly all cases, if a hill giant’s herd is threatened, the hill giant tending to the herd stampedes the dire boars toward the threat, and it hurls rocks until those trespassing into the herd’s territory are a thick paste. The CR above represents a single hill giant farmer (replace skill points in Intimidate on a standard hill giant with skill points in Handle Animal and replace the Intimidating Prowess feat with Skill Focus (Handle Animal) to give the hill giant a +19 bonus in Handle Animal), four standard dire boars, and two dire boar offspring with the young template.

3 thoughts on “Deadly Harmony: Not Your Average Herd”