Skip to content
Home / Delve into the Depths in the Kobold Blog / Don’t Look Now: Handling Fear and Suspense in Fifth Edition 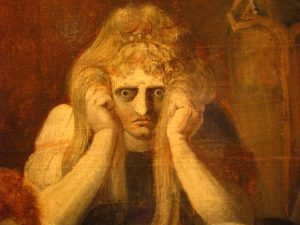 Part 1: The Birth of Something Creepy

When running a horror/suspense-themed game, you can have better results when player characters have something about them that makes them vulnerable: an element to their character that triggers a fearful reaction. It can be something as simple as a common phobia (spiders, heights, and so on) or it can be a deeply rooted fear that permeates their every action (scars, terrible memories, nightmares).

Flaws, both mechanical and roleplay-inspired, should impact the ability of characters to function in some manner. Their fears can become obstacles to overcome, which allows for interesting character development as the campaign unfolds. A horror-themed game should provide ample opportunities to face those fears.

Optional Rule: To add more mechanical emphasis to phobia- and fear-based flaws, players may wish to add a counter to the flaw. Every time characters encounter a fear or phobia, at the beginning of every round they must make a successful Wisdom saving throw (DC 13 + CR of the monster/obstacle*). Failure means the frightened condition is imposed on that character. Success means a character can take actions normally and isnot subject to that flaw for the next 1d4 hours. When a character succeeds on this save, the player can write it down on the flaw counter. After 10 successful saves, the character no longer suffers from that particular flaw. Rolling a natural 20 on the saving throw counts as two successes.

In addition, when faced with a new and terrifying situation (specific monsters, dangerous challenges, near-death experiences, and so on), if a player character rolls a natural 1 on a check or save, he or she develops a new flaw based on failing at that specific thing. A character can have multiple flaws, but never two of the same kind.

Craft new phobia-based flaws broadly enough to apply to numerous situations, but make them specific enough so that the character does not trigger any given flaw every session. You can use the table below to generate a random flaw, or pick one for your character.

* You could also start with a flat DC that the GM and the player agree upon to represent how hard that fear is for the character to overcome. Read the section about Difficulty Class on pages 238 and 239 of the DMG to set the DC for that fear or phobia. As the character successfully faces the fear, the DC might decrease in stages. Play with this optional rule and any variants you might think of to see what works best at your table, then please let us know how it went for you! And if you have any other fears or phobias you want to share for character development, please do!