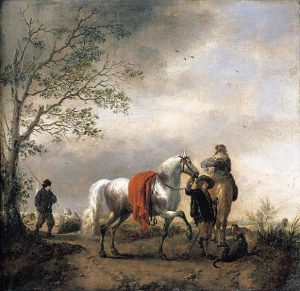 The constant warfare and border skirmishes of the Seven Cities spawn many mercenary companies and warrior orders. One of the largest and most well known is the Order of the Septime Lancers. The order produces cavaliers known for their personal flamboyance and daring tactical maneuvers in battle.

Edicts: A cavalier sworn to this order serves and protects their current patron. They have no fixed loyalty except to contracts, but a contract is bond. Beyond the patron, the cavalier must see to the interests of his company, then his order, then himself. While selfless in service, they are not beyond seeking new ways to increase their wealth, prestige, and power. They are known for their colorful uniforms and heraldry and for going into battle with a cacophony of bards accompanying them, playing brazen battle hymns on bagpipes, longhorns, tympani, and more…

“You can always hear them coming”

You lunge at your target quickly, dealing a minor blow but jostling the target’s morale with a sharp word.

One creature.
Attack:
Primary Ability vs. AC.
Hit: 1[W] + primary ability modifier damage, and the target is marked and grants you combat advantage (save ends both).

Years of training with a mount have made dismounting second nature, allowing you to change tactics quickly in battle.

You see an opening to assist one of your allies and react quickly, inspiring resolve.

Encounter • Martial, Weapon
Standard Action    Melee
Target: One creature.
Effect: You can shift up to two squares as long as you end this movement flanking an enemy. If mounted, your mount shifts with you.
Attack: Primary ability vs. AC .
Hit: 1[W] + primary ability modifier damage. Any allies adjacent to the target gain temporary hit points equal to your charisma modifier.

The enemy has formed a wall of flesh before you, but a well-timed attack allows movement that others could not foresee.

Daily • Martial, Weapon
Standard Action    Melee
Target: One creature.
Attack: Primary ability vs. AC.
Hit: 3[W] + primary ability modifier damage, and the target slides into your square. You then shift into the square last occupied by the target.
Miss: Half damage.
Special: When charging, you can use this in place of a melee basic attack.