Skip to content
Home / Delve into the Depths in the Kobold Blog / Templates: Fire, Frost, and Fang (Part 3 of 3) 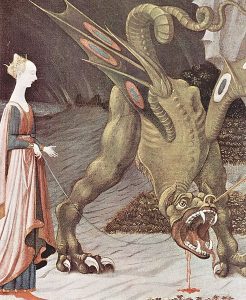 Whether through magic, heritage, blessing, or curse, a rare event occurs when a creature is born with a touch of a dragon’s power. They vary in appearance with or without tinged skin, scaled hide, talons, or a tail. The only consistent feature that is always present is a pair of leathery reptilian wings.

“Dracontii” is a template you can apply to any humanoid or beast creature. These creatures are empowered with the power or heritage of a dragon.
Prerequisite: Humanoid or beast

TRAITS
Controlled Breath
When using its breath weapon, the dracontii creature can change the power to a close blast 3 and target only enemies with the power.

Flight
The dracontii creature gains fly (clumsy; maximum altitude 3) with a speed equal to its ground speed. If the creature already has flight, it retains that ability and can use its normal fly speed or this one, whichever is greater.

Inspirational Flight Aura 5
Allies in the aura gain a +1 bonus to attack rolls. While the dracontii creature is flying, the bonus increases to +2.

A dracontii often flies over the battlefield using its breath weapon and other ranged, burst, or area attacks to harass enemies while its inspirational flight provides bonuses to allies. If the dracontii has no means to attack while in flight, it lands and enters melee while its abilities recharge. Once recharged, it attempts to shift away from battle and take flight again, spending its action point to do so if needed.