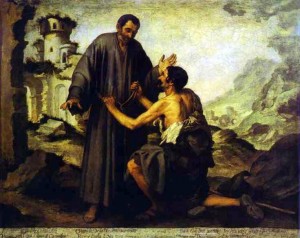 The vow of poverty is a highly restrictive roleplaying challenge. To a certain turn of mind, mine included, the severity of the restriction is the appeal of the vow. As described, a character may own a simple set of clothing, a pair of sandals or shoes, a bow, a sack, a blanket and any one other item—and only one of these items may be of some value, the rest are of plain and simple make. The vow includes additional rules that ensure that the character does not stowaway his wealth indirectly on his allies or make use of some other trickery to circumvent the spirit of the vow…

The merits of the vow are that it offers a small mechanical reward for playing a challenging character that is willing to engage in a selfless vow. But the downside is that it can be disruptive—or worse, artificial—to cater to a character that walks so far outside the boundaries of the game’s expectations. Giving a single valuable item to a monk who disdains material possessions is difficult, more so if it should be done within the confines of vow and story. Then, in a few levels, the process may repeat again if the item outlives its usefulness.

The paths of poverty streamline the process: each path is associated with a single item that grows in power as the monk does—granting benefits equal to roughly a quarter of the typical character wealth. These options are not intended to balance the vow of poverty against a character that does not take the vow—the vow remains a severe limitation—but they do allow a monk to stop worrying about the details and simply enjoy a life of poverty!

It is normal for a monk to take a vow of poverty with a purpose, a path that guides them on their vow. Below are several such paths, each tied to a particular item with specific benefits. A character who wishes to make use of these options may choose one of the paths. Once the choice is made, it cannot be undone. The monk cannot own any item of value or special significance other than the item provided with the path. No special benefits are provided to characters other than the monk. As such, its market value is the same as other mundane items of that type. Should the monk lose the item, the benefits associated with it are lost until it is recovered. After a month, he may instead acquire a different mundane item of the same type to replace the old one. At that time, the original item will lose its connection to the monk and not offer any benefits, even if recovered at a later stage.