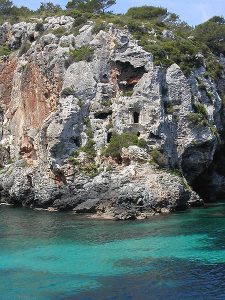 “The Last Map of the Cartomancer” presents a series of magical maps introduced through the escapades of Lan Su’Vavock and Kai Geyser, two sages on the trail of interconnected clues left behind by an ancient cartographer of legend. [Part 1] [Part 2] [Part 3]

With a grinding protest, the vault door blew open.

“It’s true what they say then.”

“At the end of the day, alchemy is simply grown men blowing stuff up.”

“Too true, I’m afraid.” Kai was nevertheless pleased with his concoction—a brutish but effective method of circumventing the Cartomancer’s final vault lock…

And when the dust had cleared, the sages stepped inside the metal chamber. It had been months since the pair had at last deciphered the now infamous smoke map, and here, at last, was the fruit of their labor: the next map, hanging from the back wall of the vault in plain view.

“Unbelievable!” said Kai as the pair drunk in the map’s simple hand-painted details. “This map leads to Casparan’s Cove.”

“Know of it?” Kai answered as he traced his hand carefully along the ancient canvass, “I grew up there!”

“And here—see here—the map takes us to a hidden beach cavern, half submerged.”

At that, Lan suddenly stopped examining the map and turned instead to stare at Kai. Kai missed Lan’s distressed body language and instead continued:

“But I know exactly where it is Su’Vavock. Right here,” he pointed. “I’ll find it for us easily for this was my secret hideaway as a child. This very spot—here. I committed no end of mischief there.”

“Impossible,” disputed Kai. “I’d remember you. I was there every summer with the gang and you weren’t among us.” Kai considered the matter for a moment but soon saw the solution. “Of course, you’re how much older than I? You likely left the old stomping grounds before we first moved in.”

“But Kai, I always thought you grew up in Halfshire.”

“But Casparan’s Cove is practically on the other side of the Grand Band!”

“Well, I suppose I moved to Halfshire later in life, though sometimes it seems as though I was born there.”

“I think you were Kai. And I’ll tell you something stranger still.”

“I too remember frolicking as a young lad in that same hidden beach cavern.”

“As I said, that is remarkable—that we both played in the same place as a child. And yet we never met until decades later.”

“True, but you don’t yet follow me. I think I once confessed to you Geyser: I suffered from Forthan’s fever throughout my youth.”

“Tragic of course—but what are you getting at Lan?”

“I was a cripple. I couldn’t have frolicked anywhere as a child, let alone in a half-sunken cave!”

“Well get your story straight then Lan,” said Kai as he slowly un-pegged the map from the wall. “Because we’re off to Casparan!”

“But my story is your story Kai—don’t you see? There’s something very wrong here. Listen: I don’t think you were ever there.”

“Never there, Lan? I stole my first kiss there!”

At that Lan grinned, suddenly amused. “Really Kai? I can’t imagine you ever actually kissed a girl.”

“Laugh all you want Su’Vavock, but I think I have a theory.” Kai slowly began to roll-up the map. “Frankly, I’m amazed I never considered it until now.”

“I never knew my father, but I was raised by my uncle.”

“Oh dear.” Lan buried his head in his hands. He was suddenly embarrassed for his companion, but he let him continue.

“What if my uncle was secretly a member of the lost Geo-Arcana Society?”

“Oh, I see—now your uncle was one of the fabled students of the Cartomancer all this time, but you never realized it until suddenly today.”

Kai ignored Su’Vavock’s skepticism as he pieced it together. “The signs were always there. What if Uncle Devron deliberately took me to Casparan’s Cove as a child, so I would know that place like the back of my hand, so when this day finally came I would be able to fulfill…“

Lan suddenly spoke overtop of Kai as they each mouthed the identical words, “my essential task of returning to Casparan’s Cove to find… the… next… map.”

Kai stopped in his tracks.

“I have the identical impression Kai,” explained Lan. “I don’t know how to account for it, but try to think through it. None of this is real. That euphoric feeling of destiny—it’s all a lie. I don’t think either of us had even heard of Casparan’s Cove until we broke into this vault a mere minute ago.”

“No, I’m not wrong. Our memories are now the map. That piece of canvass your holding, I’ll wager, is useless without them.”

Kai unrolled the map again and studied at it once more. He had to admit it was awfully simplistic in its detail. Would the beaches even be recognizable to someone who had never been to Casparan’s Cove? “Dammit! You’re saying the Cartomancer has messed with my head.”

“But you seem to be able to get past it—the memories are so real. I tell you I know every pebble on that beach more so than… where did you say I was from?”

“Halfshire, Kai! You’re from Halfshire. You studied at Saint Levronies, graduated High Suma in linguistics and mathematics—Order of the Silver Flask.”

“Well that much I remember,” said Kai with a prideful grin. Then suddenly troubled he added. “For now at least…”

Su’Vavock again went silent as he quietly considered the disturbing implications of Kai’s last train of thought. But Geyser decided to finish his fears out loud. “These memories of Casparan’s Cove, do you think they will go on to replace everything in my head?”

If I know the Cartomancer, and I think that I do—of course, unlike you, my uncle wasn’t secretly a member of his elite Geo-Arcana Society…”

Kai shot Lan a hurt look at the unnecessary jab.

“—then the effect should wear off as soon as we reach Casparan’s Cove. Once we have the next map, the Cartomancer will release us from his magics.

“Then we’d better hurry Master Su’Vavock,” answered Kai with a sudden smile. “I can’t bear the thought that I will soon conclude I spent my entire childhood days in the same water cavern as you.”

“I love that beach. Did I ever tell you it was there that I first learned to swim? The water is so perfect.”

“Me too Kai,” sighed Lan, “Me too. C’mon. Make sure you store that map away so nobody else accidently reads it. The last thing we need is for someone else to suddenly believe it’s their destiny to find that hidden beach cove.”

At that, Kai held out his hand to stop Lan.

“Now that you mention it, I don’t think the trigger was the map at all.”

“I think my memories of Casparan’s Cove started flooding back to me as soon as I stepped into the vault—even before I saw the map.”

“It’s possible—I can’t recall,” answered Su’Vavock thinking carefully. “I think I saw the map at the same time I entered. Certainly, it was the first thing I saw. No, wait, I think you could be right actually.”

“Then think about it Lan. If I’m right, then anyone who follows us here and enters the vault…“

“Our mystery pursuer!” shouted Lan. “He’ll know exactly where we’re going and how to get there—even without the map.”

“Or possibly even get there before us,” added Kai. His tone was grim. “I should never have blown the door. Now we can’t re-lock it.”

“By the gods!” cried Lan. “If he beats us to the next map, our expedition is doomed.”

“What we need is to hide the vault entrance as best we can and then get moving—now!”

Type magical; Perception DC 30; Disable Device DC 30
Trigger proximity (alarm); Reset automatic
Effect Once triggered, the trap surreptitiously implants a host of exquisitely detailed, though patently false, childhood memories within the target’s mind. The memories provide the target with the ability to unerringly locate a single destination (Will DC 22 avoids). Anyone who fails the save might gradually note the inconsistencies between the overlapping false childhood memories and the co-existing true memories (Sense Motive DC 25), allowing the target to distinguish between the various memories. Anyone failing both their Will save and their Sense Motive check simply invents a series of rationalizations to reconcile any conflict in memories, always preferring the false recollections. Once the target reaches the destination suggested by the false memories, the false memories recede and the trap ends.