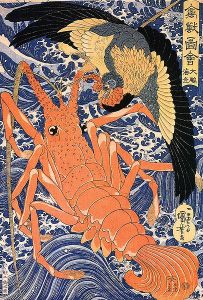 This inky figure resembles a giant newt with a crustaceous shell and lobster-like tail. It lurches forward on six strong, stubby legs, as the mess of tentacles jutting from its forelimbs creep toward you.

Trench newts, also known as tharralisks, are hideous creatures warped by centuries of life in the ocean’s deepest trenches (hence their name). Their voracious appetites and magical affinity for both darkness and acid help them conjure mayhem and spit death from their rancid maws.

Light Confusion (Ex) Bright light overwhelms the trench newt’s senses, making it twitch irritably or even lash out at the nearest creature. While in an bright light, the trench newt is confused (as the confusion spell).

Thicket of Tentacles (Ex) The trench newt can extend its many feeler tentacles into nearby squares, impeding the movement of its foes. Its enemies treat its threatened area as difficult terrain.

Thankfully, trench newts usually stay far from land although overzealous fishermen sometimes unwittingly deplete a trench newt’s hunting ground. This may force it to reach further out for prey, sometimes even venturing into ports.

Some decaying port towns welcome the presence of a trench newt, trading sacrifices of human flesh or beef for it dark wisdom. Its corrupt connection to the gods—through its commune spell-like ability—grants divine insight. No one is sure why trench newts can communicate with the gods, although some say they made a pact with an archaic god of secrets. While these dealings sometimes help the humanoids, more often than not, the trench newt ends up losing patience with the port denizens and eating them.

Less often, a trench newt will take a liking to a group of humanoids and twist them into cruel mockeries of their former selves, making them more like the trench newt itself.

Knowledge (dungeoneering) DC 15: This is a trench newt, a vile aquatic creature known for strangling its foes with its tentacles and for its ability to spray acid. This also reveals the trench newt’s energy resistances.

Knowledge (religion) DC 15: Whispers about the trench newt claim it has a corrupted divine connection from an ancient pact with a long-dead god of secrets.

Knowledge (dungeoneering) DC 20: Trench newts are extremely dangerous in areas of darkness, where they blend in seamlessly, becoming nearly invisible. They are susceptible to bright light, which agitates and confuses them.