Skip to content
Home / Delve into the Depths in the Kobold Blog / Midgard Adventures: The Raven’s Call Now Available 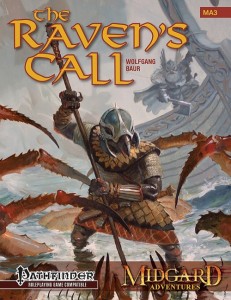 Meet the Trollkin… and drive them into the sea!

MA3: The Raven’s Call is the latest in our Midgard Adventures series: a new introductory adventure from Wolfgang Baur that brings mythic power and a true rescue story for starting 1st-level characters in the Pathfinder Roleplaying Game. This adventure introduces locales and NPCs that players will never forget —  and it includes full stats for a new PC race, the trollkin!

The trollkin and their shaman have come to a village by the sea, stormed its walls, and taken all the villagers as slaves and property. They have eaten their way through the saltfish, devoured the herd of sheep, and might be planning to eat the PCs next.

Then, one escaped villager begs strangers on the road for help… and gives them the chance to shine as true heroes striking down raiders of pure evil.

Download The Raven’s Call today from Drive Thru RPG or Paizo!

MA1: To the Edge of the World (DriveThru, Paizo)