Skip to content
Home / Delve into the Depths in the Kobold Blog / Rare Magic: The Magician, a Fifth Edition Wizard 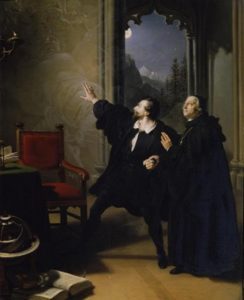 Magicians are performers and charlatans of the highest caliber, fooling even the most seasoned warlock or witch into believing they perform real magic. In actuality, their powers are far more mundane, but no less clever. They rely on sleight of hand, optical illusions, and the power to mystify through grandiose speeches and gestures. Only they themselves, and those closest to them, know the truth.

The Cost of a Great Illusion

Magicians require an enormous amount of coin and prep work to create convincing magic tricks. They rely on their Intelligence and their Charisma to draw people close, but they use gold pieces the way a wizard might use spell slots, or a monk uses ki points. To a magician, the ability to spend coin on supplies beforehand is the difference between a merely decent performer and a great performer.

As such, magicians make use of downtime activities in ways few other characters do. When not adventuring, magicians are practicing their craft or performing in front of others. These performances can earn them gold to spend on further tricks, as well as reputation, which can be used to grant themselves advantage on certain rolls against creatures who have heard of them before.

Instead of a spellbook, magicians have a public persona that they adopt that’s in addition to their real names. This includes suffix monikers like “the Amazing,” “the Mystifying,” “the Great,” “the Enshrouded,” and so on. It is only when this persona is adopted and referred to do your tricks hold sway and you gain reputation points.

Reputation points are a resource that you can spend as a bonus action to grant yourself or an ally you can see advantage on the next d20 roll. There is no limit to the amount of reputation points you can have, but they only last for two weeks in game upon receiving them.

At 1st level, you can do a number of simple tricks that create the appearance of magic. You gain the prestidigitation cantrip. The use of this spell does not detect as magical, and creatures can make a DC 10 + half your magician level (rounded down) Wisdom (Perception) check to disbelieve it.

Each use of this cantrip costs 5 gp in expended supplies.

At 1st level, you can command attention from those around you. As a bonus action, you speak in a convincing tone, creating the illusion that whatever you say will surely come true. You then grant a 1d6 bonus to either your next d20 roll or the next d20 roll of an ally within 30 ft. of you. This includes attack rolls, ability checks, and saving throws.

You can use your Booming Presence a number of times equal to your Intelligence modifier before needing to finish a long rest.

At 2nd level, you are now proficient enough to put on a magic show. This is a downtime activity that rewards you with reputation. A simple show takes 3 hours to prepare: an hour to spread the word, an hour to set up a quick stage, and an hour to prepare your act. It costs 25 + 1d12 gp in expendable supplies to run.

When performing your act, you make Intelligence (Arcana or Performance) contests with the assembled crowd. For every success, you perform a trick correctly and earn 1 reputation point, to a maximum of 5 successes. You can withstand a total of 3 failures before the crowd turns on you, losing all but 1 reputation point won during the contest.

You can only stage one magic show per day at 2nd level.

At 3rd level, you can create harmless sensory effects that appear almost indistinguishable from hazardous spells. As an action, you can cobble together a number of expendable supplies to cast a spell effect equal to that of an evocation spell. Creatures affected by the spell must make a Wisdom saving throw against your spell save DC. Failure causes them to be frightened and take psychic damage equal to half of the spell’s listed damage.

You can cast as many spells as you have the expendable supplies and gold to afford. Each spell costs 100 x the spell’s level in gold pieces.

At 5th level, you can whip out your cape or cloak or festive hat to distract and disorient an enemy. When within 5 ft. of an enemy, as an action you can confer disadvantage on their next d20 roll. This effect lasts until the enemy makes its roll, or until end of a number of rounds equal to your Intelligence modifier.

At 6th level, you have grown accustomed to keeping tricks up your sleeve. As a bonus action, when you successfully hit an enemy with a melee attack, you can whip a magic trick out from your sleeve to hinder the enemy with a status condition. They must make a Dexterity saving throw against your spell save DC or be blinded, deafened, or frightened for a number of rounds equal to your Intelligence modifier.

You can use a Magical Ailment again after you finish a short or a long rest. At 9th level, you can use it twice.

At 7th level, you have made a bigger name for yourself. When you gain reputation points from an activity, you gain twice as many. In addition, you automatically have advantage on Charisma (Persuasion and Intimidate) checks.

At 9th level, your ability to create convincing illusions and tricks has improved. When you use your Spells as Illusions feature, the expendable supplies cost for each spell is reduced by half.

At 10th level, your reputation has reached beyond borders, and you have become a veritable household name. If you are incapacitated, seriously cursed or poisoned, or killed, you can grant an ally your clothes and your personae, and they will gain all the previous benefits and features of a magician of your level (excluding increases to hit points, Hit Dice, and ability score improvements).

4 thoughts on “Rare Magic: The Magician, a Fifth Edition Wizard”