Skip to content
Home / Delve into the Depths in the Kobold Blog / Places to Go, People to See: Morgue of Tsanthallos 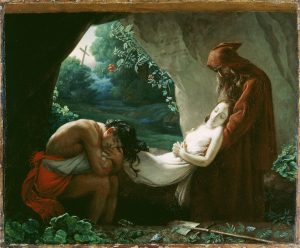 “And just what are you planning to do with the body of my brother, monk?”

“I will bear him to the Morgue of Tsanthallos, friend warrior, the only place in this multiverse where the dead will remain truly undisturbed. There he may rest until such time as he is claimed. You may visit him, of course, should you be so…inclined.”

Where do the dead go? Some get buried, some get burned, some get resurrected in one form or another. But the rest? How many thousands have died—in war, famine, plague—how many millions? Where do they rest before they are divided into the various heavens and hells? The answer is the Morgue of Tsanthallos. Or should that be morgues? Difficult to tell. Is it one vast, cool mortuary with a billion doors—an aperture in every major city for those slain in unfortunate robberies or as the result of vast conspiracies to be taken through—or does each individual morgue simply lead into every other in an impossible labyrinth of cool stone stretching forever onward?

Each morgue is a mass of obsidian within; chambers where smooth blackness gleam across walls, roof, and floor from which rise slanted tablets in endless serried ranks—each tablet contains three bodies of exactly matching proportions, and, where possible, features. These aren’t sets of triplets, at least not usually. They are simply the eternal recurrence of faces found throughout a world and its history. And who tends these bodies lying in state? The Monks of Tsanthallos, of course. These monks are masked, gloved, and immured in huge, shapeless robes that disguise gender, species, and any other distinguishing feature. Monks of Tsanthallos never reveal a trace of their identity—if of course, they ever had one. When they speak, they speak with one voice, almost toneless—a noise that simply occupies the air and is gone. Again, it is perfectly genderless and neither high pitched nor low. Among those who have heard it, this voice is called the Intonation of Tsanthallos. Some claim that anyone who has disturbed a grave or ravaged a tomb can be driven mad by the sound of those words. Necromancers are deathly afraid of the Tsanthallos priesthood, and well they might be: the only times the monks emerge from the morgue are to collect the dead and to hunt those who would bind the dead to their own will.

And as for Tsanthallos, the God of Corpses? Little is known of this deity except that it considers each and every corpse to be under its care and subject to its laws. Whether Tsanthallos is the child of a God of Death or a funeral priest who ascended to godhood through an obsessional care for its charges is unknown. On the rare occasions that Tsanthallos has been glimpsed, it has been dressed precisely as its priests with but two differences. One is the deity’s size—often of 20 ft. or more in height—and the second is the mask that Tsanthallos wears. It is formed purely from obsidian, but obsidian that has yet to fully solidify, so it still possesses the liquidity of volcanic life. Tsanthallos is well known to every pantheon, for it is Tsanthallos who arranges for the dead to be sent to the afterlife, supervising the transition of the soul and preserving the body in the endless, chilly catacombs of the infinite morgue that bears its name.

2 thoughts on “Places to Go, People to See: Morgue of Tsanthallos”