Skip to content
Home / Delve into the Depths in the Kobold Blog / Real Steel: The Mystery of Steel—Myth and Fact of Forge Folding 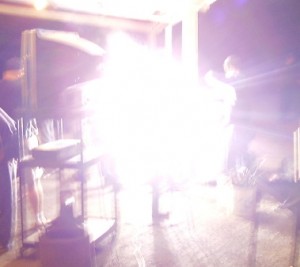 Of all the bladesmithing processes, the one surrounded by the most mystery, the process that has spawned the most legend and myth, is unquestionably forge folding.

Forge folding, the process that yields folded steel, is a general term to describe several different processes that different cultures have used since steel was first made. The physics of the process are fairly simple: steel is heated to forging temperature, hot cut about 3/4 through, folded over on itself, fluxed, heated again (but now to welding temperature), and then subjected to pressure by hammer blows or from a press. The heat and pressure act together to weld the two faces of the steel together. This element is called forge welding… 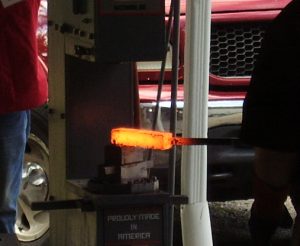 An awful lot of things can and do go awry in forge welding.

Failed welds are the most obvious failure. A failed weld is usually the result of either not reaching welding temperature before attempting the weld, or reaching welding temperature but waiting too long to attempt the weld (there is a window of only a few seconds on a small work piece). Both result in the steel not sticking and the failure is obvious; the two pieces that are supposed to stick together fall apart.

Inclusions are foreign objects that get caught in the weld. A small one can go unnoticed if deep enough, but shallow ones can show as surface imperfections during the grinding process. All of them are serious enough to cause a blade to break or delaminate at an inopportune moment. They are usually composed of forge scale (iron oxide) or flux (most smiths use anhydrous borax) which does not get pushed out of the weld. They can be due to sloppy welding but are sometimes due purely to bad luck.

(Speaking of luck, even though modern smiths tend not to be as superstitious as our ancestors, we still do some things that date back a few centuries just to “make sure.” Something I find interesting is the fairly common practice of splashing some beer into the hot forge to pacify the fire sprites who reside there and, depending on their mood, encourage them either to help or hinder the resident smith. I confess that I do it on occasion. I’m sure this practice has nothing to do with having an excuse for having cold beer in the ever sweltering smithy.)

Cold shuts are essentially an area of failed weld surrounded by successful weld. This forms a pocket of gas that expands and appears as a blister in the work piece. While a failed weld can always be cleaned and re-welded, a piece with a cold shut, in my opinion, needs to be discarded and the work begun anew. Although I have heard that some very skilled smiths can hot slit a cold shut, force out the gas, and complete the weld, I don’t think it’s worth the effort or risk. 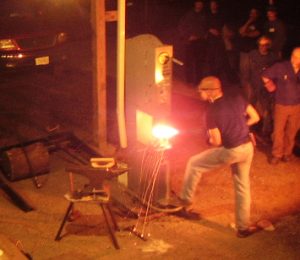 Modern Damascus (And Not a City in Syria)

I like to keep things simple and use terms that are widely understood and generally accepted. You may hear someone say pattern welded steel. Have no doubt, it’s Damascus steel. To make things very simple, I’m going to explain to you how I make random pattern Damascus steel. There are many pattern and steel combinations available to the modern smith, but random is the most basic pattern and 1084 and 15N20, in my opinion, is the most foolproof combination of steels.

I start with about 8 alternating layers of 1084 and 15N20 that are about 1-1/2 in. × 3 in. and are MIG welded together on the corners and have a piece of steel bar welded on as a handle. The MIG welding keeps everything together until I make the first forge weld, and the steel bar makes it easier to handle than using tongs. I heat this billet up to “yellow heat” in the forge and then pull it out, turn it on its side to expose the gaps between the layers, and sprinkle on some borax.

The billet goes back in the forge, and I watch the borax flux until it first bubbles, then smoothes out and becomes shiny like butter melted in a pan. I then pull the billet out and very quickly put it in my 24-ton hydraulic press and make the first weld. The molten flux flows out of the layers and carries with it any oxide and foreign material that may have been caught in the weld. If successful, I now have 8-layer Damascus that I can forge into a blade without any folding. I like to have 64–512 layers, so I’ll usually cut, fold, and press 3–6 times. This process doesn’t make super steel. In fact, every time steel is heated to these temperatures, there is a risk that the steel can be ruined by changes made by the heat to the metal’s chemical structure.

Damascus steel is made for aesthetic purposes only. The pattern is brought out by etching. I use ferric chloride because it’s relatively safe and very effective. When etched, the 1084 darkens and the 15N20 stays bright because it contains nickel (that’s what the “N” stands for), which resists the etch.

How The Japanese Do It (Or Whoever Smelt It…)

Traditional Japanese sword steel is made from a very low quality and low yield ore called iron sand or black sand. The steel that results from smelting this sand is called tamahagane, which has fairly low carbon content and is full of impurities, such as copper, which have deleterious effects on the steel. The smelt yields blooms of iron, low carbon steel, and high carbon steel; each has its uses and is tested to determine its identity and sorted. Traditional Japanese smiths burn out the impurities by repeatedly folding and forge welding the steel. The folding also evens out the carbon to create more homogenous steel. The migration of carbon through steel takes a painfully long time, but folding helps speed the process because it repeatedly moves the surface of the billet to the middle. Bear in mind that what has been made is a raw material; it still has to be forged into a blade, hardened, tempered, polished, and mounted.

There are no rules about how many times the steel is folded. The smith knows when it’s ready by how it looks, feels, and moves under the hammer.

The end result is an amazing testament to the hard work and dedication of the ancient smiths who created this process through trial and error. They took an inferior ore and turned it into steel that is still considered to be good blade steel even by today’s standards. That steel, tamahagane, was used to make one of the most famous and myth-spawning blades in human history—the legendary katana.

10 thoughts on “Real Steel: The Mystery of Steel—Myth and Fact of Forge Folding”