Skip to content
Home / Delve into the Depths in the Kobold Blog / Book Review: Hunter and Fox 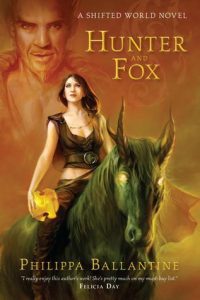 Talyn is a Vaerli, a once powerful race that has had the seven gifts of magic taken from them by the Caisah, a powerful and evil being who controls a world that is constantly changing. When I say “changing,” I mean the environment literally changes—sometimes at the worst possible time. Where there are mountains, a few days later there could be plains. This phenomenon is why the setting is called the Shifted World. Talyn is a hunter, but the problem is she is working for the Caisah, the very same “being” that not only took the powers from her people, but that also rules over the Shifted World with an iron fist. Talyn carries a creature known as a Kindred within her—without even knowing it. The Kindred are an ancient and powerful race that hopes to help bring the Vaerli back into power. Just when you thought things were complicated enough, throw in Byre, Talyn’s long-lost brother, who has been thrust into a quest to lift the terrible curse set upon the Vaerli. But wait, there’s more: Enter Finn, who is also known as the Fox—a teller of tales who harbors his own secrets.

If that brief synopsis makes it sound like this book is confusing, then you might be right. This novel has quite a few intricate moving pieces that come together to form the whole of the machine. I have read almost everything that Ms. Ballantine has written, and this novel is by far the most chaotic novel I have read of hers. I don’t have a problem with chaos, and if you consider the environment as a major character (which it is), then the style of Hunter and Fox is actually genius. It is one thing to convey chaos into your writing, but the genius of what Ballantine has done is her ability to incorporate that chaos into her writing style. Ballantine is normally what I would call a neutral good writer. She has skills, and she knows what she needs to do to tell a story. Hunter and Fox is a complete departure from her normal solid style. I’m not saying this book is bad, but for people who fear change, this book will not resonate.

One of the not-so-well-hidden Easter eggs in this novel is that it keeps you guessing. None of the characters in this book even knew what was going on. Half of the fun was watching their genuine surprised reactions to the events that were unfolding and literally shifting around them. Many fantasy standbys are in this novel, but Ballantine still makes this book feel novel. There is no point in the Hunter and Fox where you feel comfortable with the story, the setting, or any of the characters, and if you are willing to place your trust in Ballantine’s skills as a writer, you won’t be disappointed. Let’s face it: When the bard and the evil bad guy are vying for the most “stable” character award for this book, you know Ballantine has brought the heat when it comes to chaos.

To call this setting high magic is like saying Cheech and Chong has some drug humor. At times, it feels like every race on this world is magical and most of them are hiding their magical powers, have had them stripped away, or are just discovering them. And I wasn’t kidding about the chaos. There are a few times when I had to re-read a passage or two to keep up with the fluid changes that are in abundance in this book. At no point did re-reading stop me from enjoying this unique story.

This book will not be for everyone. If you are what I’d call a lawful reader, you might want to try some of Ballantine’s other novels first. If you go into this novel thinking that you are going to swim in a controlled sea of chaos rather than just reading it, you will do well. Some critics might pan this novel because it is a departure from what I’d call the lawful good writing style of Philippa Ballantine. I say right now that they are wrong to do so. The ability to embrace and make coherent such a complex and mixed-up story shows just how good she really is. Philippa Ballantine, when combined with husband Tee Morris, is a wondrous thing to behold. Hunter and Fox reminds us all that she does just fine on her own.