Skip to content
Home / Delve into the Depths in the Kobold Blog / Rare Magic: The Wildling, a Fifth Edition Druid 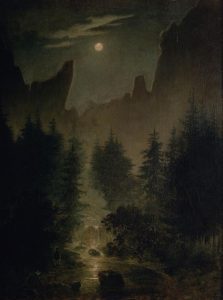 Wildlings are those who have made the wilderness their home, whether by choice or by circumstance. Rather than draw upon magic, the wildlings’ power comes from their ability to blend into the wild, to mimic the form of its many creatures, and to use the wilderness to their tactical advantage.

Wildlings revere nature, using it as their home and their means of defense. They study animals for long periods of time, learning how to imitate them—their movements, their hunting styles, and the way they can blend into their surroundings, eventually learning to employ these animal techniques themselves. Every advantage that nature has, the wildling seeks to emulate, even if it leaves them practically naked, covered in leaves and dirt.

Wildlings will seek to protect their native wilderness and are willing to accompany other adventurers to do so. If a wildling was raised in the wilderness, they may be curious about the “civilized world” of elves and men, and want to explore beyond their woodland or jungle home. Wildlings are often quick to want to share their accumulated techniques and skills, seeing them as the proper way of doing things.

You are preternaturally aware of animals near you and can communicate with them in a limited way. You can sense the presence of any beast within 30 ft. of you. You can communicate simple ideas back and forth with animals with a successful DC 10 Charisma (Persuasion) check.

At 1st level, you can blend into the surroundings of your native wilderness. Choose one of the following types of wilderness to be your native biome:

While you are in this kind of biome, you gain advantage on all rolls to remain hidden from sight and sound. You also gain a +2 bonus to Armor Class.

Starting at 2nd level, you can use your action to mimic the powers of a wild beast that you’ve studied before. You can do this a number of times equal to your Constitution modifier (minimum of once). You regain spent uses when you finish a short or a long rest.

You start play being able to mimic beasts that have a challenge rating of 1/4 or lower that don’t have a flying or a swimming speed.

You can mimic a beast for a number of hours equal to half your Wildling level (rounded down). While you are mimicking a beast, you gain that beast’s Senses and their Traits, provided none of them are related to flying/swimming. You must have both hands free and be unencumbered while in Beast Mimic.

At 3rd level, you can distill the natural remedies of your native biome into a potion that can be quaffed in times of need. Once per day, during a short or long rest, you can brew a potion that has one of the following three properties:

Your Wilderness Tincture is usable only for a number of hours equal to your wildling level, after which the potion becomes inert.

At 5th level, you are adept at snaring and capturing animals. As a downtime activity, when hunting for food, you gather twice the amount of food you roll for, or you can alternatively choose to keep any caught animals alive. In addition, you have advantage on Dexterity rolls to trip or knock targets prone.

At 6th level, you have studied beasts and their methods of attack closely, and can now mimic them to a certain extent. When using Beast Mimic, you can now replicate the attacks of the beast you are mimicking, using bone tools, jaws, or weapons to do so. If you are unarmed, these attacks deal half damage. You cannot yet use a Beast’s multiattack feature.

At 9th level, you can now brew a Wilderness Tincture with one of the following two properties:

Hardened by the Elements

At 10th level, your exposure to the elements of nature have made you harder and more resilient. You are immune to poison and disease. You cannot be frightened by beasts, elementals, or fey creatures.

1 thought on “Rare Magic: The Wildling, a Fifth Edition Druid”