Skip to content
Home / Delve into the Depths in the Kobold Blog / Character Theme: Mountain Priest (Part 2 of 2) 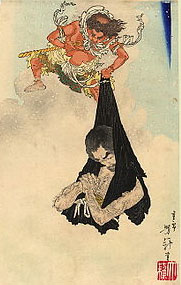 Level 2 Utility Power
The dangers of living in remote regions are many. You learned early that the spirits of water can be a great boon when living in dangerous lands if one is injured, because they can alleviate lesser hurts.


Level 6 Utility Power
The earth is implacable and unmoving, and the spirits of the earth can provide you with some of this innate strength. You have learned how to summon the earth spirits to protect yourself from harm, but such protection has a price in mobility.

Earthen Roots     Mountain Priest Utility 6
You call on the spirits of earth to grant you their strength and endurance for a time.
Encounter • Primal
Minor Action     Personal
Effect: Until the end of your next turn, you gain a +2 power bonus to Endurance checks, you gain resist 5 to all damage, and you are immobilized.
Level 11: +4 power bonus, resist 10.
Level 21: +6 power bonus, resist 15.

Level 10 Utility Power
The wind is a strong but subtle ally. It can carry whispers great distances or destroy things with the force of a hurricane. You have stood in the raging winds and learned their secrets, and now you can call on these secrets to shelter yourself from distant foes.

Sheltering Winds     Mountain Priest Utility 10
With a prayer to the winds, you summon a gale that protects you and your allies from distant foes.
Daily • Conjuration, Primal, Zone
Minor Action     Close burst 2
Effect: The burst creates a zone that lasts until the end of your next turn. When you move, the zone moves with you, remaining centered on you. While within the zone, you and any ally in the zone gain a +2 power bonus to all defenses against attacks made by enemies outside the zone.
Sustain Minor: The zone persists.