Skip to content
Home / Delve into the Depths in the Kobold Blog / Treasure Tables: One Man’s Trash… 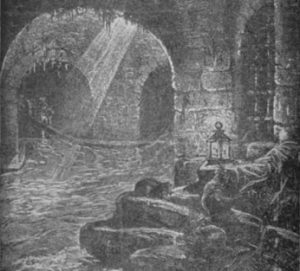 Adventurers frequently find themselves in places where finding standard treasure might seem unusual and unlikely. If the local sewers aren’t paved with gold, use the following table to add a little variety to your loot or let it serve as inspiration for a story hook. The value of the items can vary at the DM’s discretion but are suitable replacements for a quest reward or as the centerpiece for a somewhat odd collection, although they could be worth anything to the right person. You can roll randomly for a result below using the handy number provided with each entry to figure out your result on a d20. You can also pick one that works for the area in which your characters currently linger.

2. A locked wooden box. Affixed to the top are half a dozen small adjustable mirrors and on one corner a black cube emits a single point of ruby light.

3. An intricately articulated wooden figure of a multi-headed dog covered in a moldy gray fur.

4. An extraordinarily fine miniature saddle, as though for a small dog, worked in supple leather and decorated with gold and silver thread.

5. A perfectly smooth clear glass square, roughly arm-length along each side, with beveled edges and rounded corners. It may have once been a table top.

6. A scratched and dented locket which, when opened, appears to contain a much larger space.

7. The severed claw of some monstrous scaled creature, preserved and formed into the base of a chair.

8. A large, transparent red tumbler made of some unidentifiable material, its sides textured delicately and a single seam recognizable down one side. Strange characters decorate the bottom.

9. An ornate, hand-inlaid globe seemingly floating within a large wooden cradle fixed to the ground. The globe moves easily beneath your touch.

10. A series of ancient, hand-drawn maps representing uncountable countries and territories in some unknown part of the world.

11. A beautiful, jewel-handled stiletto. The blade seems to shimmer with an ugly green tint.

12. A tiny, brindled rodent scampers back and forth, trapped within a clear glass sphere.

14. A polished metal case containing a set of fine needles, similar to those for sewing, several thin glass cylinders, and a single ampoule of a sluggish red fluid.

15. A filthy, mummified monkey’s paw, curled into a fist and clutching what looks like an egg.

17. An ugly gray wine skin, heavier than it looks, sloshes and gurgles in response to any movement.

18. A smooth, white automaton vaguely resembling the shape of a small dog. Perhaps it wants to play.

19. A tiny, polished wooden coffin. The lid is sealed with wax and the sound of tumbling glass shards can be heard as the box is moved.

20. A once-beautiful golden clasp, as for a ladies’ traveling cloak. The shape has been bent and distorted and now resembles a sneering face.