Skip to content
Home / Delve into the Depths in the Kobold Blog / KotM Fight! Spark 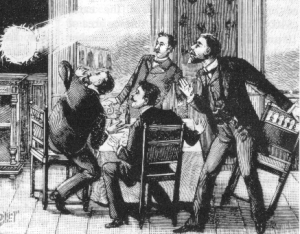 Welcome to the King of the Monsters Contest finals: the spark is finalist 7 of 10. These submissions are left almost entirely as they were received with the exception that all submissions have had minor alterations for proper spelling (not grammar), formatting, and the addition of an image. Let the fight commence!

This large mote of electrical energy floats menacingly nearby, erupting in a shower of sparks and tendrils of electrical discharge as the creature charges forth, headstrong into its enemies, disappearing in an instant leaving only the whiff of ozone…

When a great storm rips across a world in the Material Plane, it sometimes tears rifts between the planes and lets loose base creatures composed entirely of elemental energy, yet embodied with a sentience resembling the denizens of its new home world. A spark, also called an ampere by those studying such phenomenon, does not intend to understand other creatures; it only wishes to use them as a conduit for their unbridled energy.

TACTICS
Before Combat A spark lies in wait for an appropriate victim, controlling its light output or inhabiting a mundane metallic object.

During Combat A spark sizes up its combatants and chooses the strongest victim to inhabit. Once inside a victim it attempts to use the new vessel to deliver shocking grasps or casting lightning bolt or call lightning against distant enemies. If ejected from a creature, a spark immediately tries to inhabit another victim.

Morale Clever enough to know when the fight is lost, a spark stays in a victim long enough to feel them perish, but flees combat if unable to inhabit other enemies.

ECOLOGY
Environment any
Organization solitary or pair
Treasure none

SPECIAL ABILITIES
Inhabit (Ex) As a standard action, a spark can attempt to infuse itself within a mortal host. The spark must make a successful touch attack against a Medium or smaller creature, which can be combined with the touch attack from its shocking grasp spell-like ability. This action draws no attack of opportunity. The victim of this attack must succeed on a DC 17 Will save or become inhabited by the elemental. Once merged with the victim, the spark can choose to lurk just beneath the surface, or use its spell-like abilities through the host. Each time the spark attempts to use a spell-like ability the victim can attempt a new saving throw to expel the creature. While inhabiting a creature, a spark takes no damage from physical attacks, quarter damage from energy effects, and half damage from force effects.

The victim of this symbiosis gains the creature’s Dexterity and Charisma score, but otherwise keeps all normal statistics. Victims harboring a spark gain none of the creature’s natural immunities. A spark can attempt to control the victim’s actions beyond spellcasting, but usually the speech and actions seem jerky and erratic to its peers. To resist this dominance, the victim must succeed on a DC 17 Will save each round their normal actions are compromised. In addition to creatures, a spark may inhabit unattended metallic objects indefinitely. This ability is equivalent to a 5th level spell and is Charisma-based.

Fueled by frenetic thought patterns and erratic actions, a spark jolts through its new world in search of a physical body, drawn by an urge to know form. Some accomplished spellcasters seek sparks for symbiosis. Sorcerers with elemental bloodlines or clerics devoted to deities with elemental domains reach an agreement with these strange creatures and allow them to ride within their bodies. Consider any NPC having a voluntary, symbiotic relationship with a spark to be CR +2.

Rare and single-minded, only in the most unique circumstances do these creatures meet one another. On rare times when these creatures form on the Material Plane, they have an alternately charged mate from who they never travel more than 300 feet. These pairs are particularly dangerous to the already storm-soaked region. Crackling with energy too quickly used up, sparks rarely survive longer than a year, even within a symbiotic relationship with a mortal form. When they expire, they simply wink out, and sages hypothesize the creatures simply return to the fabric of the elemental plane.