Skip to content
Home / Delve into the Depths in the Kobold Blog / Real Steel: The Danish Axe 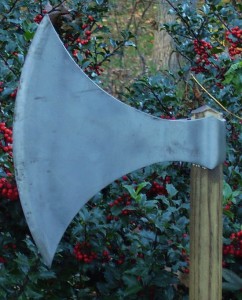 The Danish axe—also called the Dane axe and the great axe—is one of the better-known Norse weapons. Although perhaps not as uniquely Norse as the bearded axe, most military history buffs and many fantasy fans can identify it accurately. The forging techniques and basic construction are very similar to the bearded axe, but both the construction and use of the weapon show important differences as well.

I’m going to take the opportunity to introduce you to a bladesmithing technique early smiths used to save valuable high carbon steel.

It’s Got One Purpose

As we discussed when we talked about the bearded axe, the Vikings clearly distinguished between axes made as tools and those made for war. Bearded axes were used for both, with each axe being made for a specific purpose: some for woodcutting, some for skinning and butchering game, and others for fighting. The Danish axe differs in that, while smiths’ preferences show some variety, every Danish axe was made for war…

The design is pretty straightforward. The overall length is 4-1/2 to 5-1/2 ft. with a hardwood haft. The blade’s cutting edge has a sweeping curve with a cutting edge of 8–12 in. The surprising thing about the Danish ax is the weight; for its size, it’s very light with the head weighing only 2–4 lb. The blade has a very large profile but is less than 1/8 in. thick. The resulting geometry is more like a meat-cutting blade than a wood axe. The result is a very nimble weapon that is light and fast in the hands, with amazing cutting power. 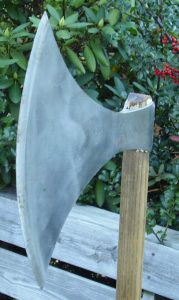 A shock weapon has a psychological effect above and beyond its ability to kill. In the modern military, a medium-sized machine gun like the M60 will often fill the shock weapon role in a small unit, especially in ambushes and surprise attacks. Many cultures have an analog, and the Danish axe certainly fits the bill.

The mere sight of howling, charging Norsemen wielding this weapon caused panic in the ranks and a loss of discipline. The accompanying flight of heavy spears only enhanced the effect. This shock effect and the accompanying fear should be accounted for in any encounter involving this weapon.

The thin geometry of this blade means it is best used against unarmored or lightly armored targets. The blade shape, long handle, and light weight mark this as a slashing weapon; somewhat of a surprise for an axe, and a big axe at that. This axe makes for fast moves and high-powered cuts as well as quick recovery and redirection. The sweeping blade and long cutting edge make this a terrifying weapon.

Although not truly bearded, the ends of the cutting edge (called the heel and toe) of a Danish ax project up and down enough to effectively jab and, in a pinch, could be used to hook. The length allows attacks over and around shields and perhaps even past the first rank to hit a target in the second rank—a nasty surprise for the relief warrior waiting for his turn on the front line.

Like the bearded axe, the Dane axe is forged by folding a steel bar over and forge welding it to itself. An eye is left to accommodate the haft, and the blade and eye are forged to shape. The axe head is rough ground to remove the forge scale, heat treated, finish ground and generally cleaned up, and finally fitted on a hardwood haft. The end of the haft is split and a wedge inserted, effectively locking the axe head on the haft.

We’ve talked before about what a precious commodity steel has been throughout history. Making steel required an enormous expenditure of time and resources, so every bit had to be used as efficiently as possible. During a smelt, wrought iron, low-carbon steel, and high-carbon steel are produced (sometimes there’s cast iron, but that’s not important now). Only the edge of an axe blade needs high carbon, because that’s the only part that needs to be hardened. To save that precious high carbon steel, a smith forges the axe head out of iron or low carbon steel but leave the edge unwelded and flared open. A high carbon steel bit is then forge welded in, the edge forge welded closed, and the axe is finished as described above.

The axe pictured is a Petersen type M (while you’re surfing for Petersen types, check out the Oakeschott typology system also), and was started by an immensely talented swordsmith named Paul Champagne. I had the good fortune to meet Paul and have admired his work for a long time. When this axe came into my possession, the forging was complete as well as the rough grinding. I’ll be doing some engraving and carving, heat treating, and final grinding the beast. I think I’ll keep this one for myself.