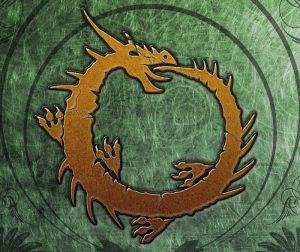 Some of the magic of the Grand Duchy is Deep Magic, fey-inspired and unique to the forested lands protected by the Beloved Imperatrix Regia Moonthorn Kalthania-Reln van Dornig. But clever travelers and adventurers have learned to exploit such ancient arcana and incorporate it into useful wondrous items. Here are a few of those items, crafted using spells from Deep Magic.

In appearance, this lacquered wood-carved mouth instrument resembles a duck-hunter’s call, except for the red band along the mouthpiece and the hooked dragon’s claw wood-burned into its side. Once per day, blowing into it causes it to sound a drake’s mating call, irresistible to any dragon type within a radius of 10 miles. The character can make the duck’s call sound as if it is coming from the point of origin or along any location out to a distance of 10 miles in the direction it is blown, and he or she can make it untraceable to the point of origin if desired. (Subsequent uses in a given day sound like an ordinary duck’s call.)

Mischief makers of all stripes know that the greatest distraction is vanity, which this pie-sized looking glass mounted on a handle and frame carved to resemble a vine with ripe berries is designed to exploit. Miscreants who hold up the mirror so that the target can gaze into their reflection become affected when the holder recites the enchantment engraved on the reverse side: “Mirror, mirror in my hand, who is the fairest in all the land?” The target is mesmerized by the reflection of their own magically enhanced beauty as if they viewed a person under the spell peacock’s pose (including chance for saves), but for a period lasting 30 minutes. It can be used once per day. Otherwise, the mirror acts as a normal mirror.

When storms and clouds blot out the sky, many a navigator at sea or overland caravan master is thankful for this chart, named for the red queen of Courlandia and likely crafted by her court astrologer Cansu Fulden. In appearance, it is a map-sized parchment, blank except for the border of navigational markings and compass rose. But if unrolled when the stars cannot be seen and its command word spoken, the heavens above are revealed on its surface, including all stars and constellations essential to navigation. The chart can be used only once per day, but the effect lasts until it is rolled up or the skies become clear. It is rumored that the chart even works for travelers traversing the Shadow Roads.

This goat’s hide and fleece bear a metal clasp and chain, and it grants the user the ability to move unencumbered over rugged mountainous terrain no matter what the altitude.