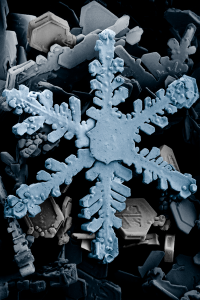 To celebrate the release of Open Design’s Northlands: Roleplaying in Winter’s Chill, Chris Harris and Dan Voyce bring you the frostveil.

They took the sled dogs first, one by one, and later the seal-skinner set to guard them. We’d hear a confused, muffled cry in the wind and then we’d find them—a raven harvest cold and stiff on the ice. Next time, we hid ourselves and watched, and saw them floating through the air like paper jellyfish or a wizard’s kite: what at first appeared to be a wisp of blowing snow failed to disperse, coalescing into a billowing, snowflake sail that moved with graceful and sinister purpose. The “cloak of death” our skraeling guide called it.

“The north wind blows and the blizzard-ship billows its sail of snow-stars.” So say the Northmen, and it’s why they always set the door of their tents and snow-shelters facing downwind of the prevailing breeze. It’s fear of the frostveil: the silently gliding, beautiful killer of the polar desert.

Whipped through the air by snowstorms, resembling a spider’s web dangling with delicate ice crystals, frostveils are actually a semi-sentient algae adapted to the merciless cold of the uttermost north. Their net-like body and trailing tail of transparent, membranous fibres are connected by flat nodes shaped like overlarge snowflakes, each a handspan or more in width. They act as miniature sails to carry the all but weightless frostveil aloft on the wind in search of prey…

Gossamer tendrils of connective tissue stream nearly invisible behind and between the flying snowflakes, ready to grab and tangle any warm-blooded creature it detects. Each star-like node contains crude sensory organs able to detect warmth as meager as a living creature’s breath and steer the gliding web toward it. Dragged in by swiftly contracting tendrils, the frostveil draws its body together, enveloping the source of heat, spreading out to cover every inch of its surface. Once attached, the frostveil clings tenaciously to its victim, draining their body heat—and often asphyxiating them in the process—while secreting psychotropic spores to quieten the target, and covering itself in acidic enzymes to prevent outside interference and aid digestion of its prey.

A frostveil grows rapidly after feeding on a human-sized or larger victim. After several days, it divides into two new creatures, each ready to be carried aloft when the next wind brushes by.

SPECIAL ABILITIES
Engulf (Ex) A frostveil can try to wrap its body around a Medium or smaller creature as a standard action. Targeted creatures can make attacks of opportunity, but if they do so, they are not entitled to a saving throw against the engulf attack. Those who do not attempt attacks of opportunity can attempt a Reflex save (DC 18) to avoid being engulfed; on a success, they are pushed back or aside (target’s choice) as the creature moves on. Engulfed opponents gain the pinned condition and must save against the frostveil’s psychotropic spores. The save DC is Dexterity-based.

Enzyme Defense (Ex) As a swift action, frostveils can sweat out a powerful alkaline enzyme that breaks down flesh and organic materials into useable nutrients. Creatures engulfed by the frostveil or creatures who strike it with an unarmed strike or natural weapon take 1d4 acid damage.

Freeze (Ex) Against snowy ground or when flying in a blizzard, a frostveil can Take 20 to hide in plain sight, appearing to be a patch of snow.

Windborne (Ex) Frostveils weigh next to nothing and can catch the slightest breeze but lack the motive power to fly unaided. Their fly speed is dependent on the strength and direction of the local wind: light (10 ft.), moderate (20 ft.), strong (40 ft.), severe (60 ft.), windstorm (80 ft.), hurricane (100 ft.), or tornado (120 ft.). They cannot move against the wind but can tack like a sailing ship to move at half speed up to 90 degrees from the direction of the wind.

Frostveils in the Frozen North

Frostveils sail at random on the north wind, alighting on the snowy ground when the wind dies or their tendrils snare an unwary victim. Their typical tactic is to swoop silently onto unwary prey, using blowing snow for concealment. From time to time they also gather high in the sky when the wind whips them in circles, engaging in an elaborate twisting dance where their tendrils touch and tickle each other for reasons no earthbound sage has yet determined. Lit by the northern lights, skraeling shamans say the dance of the frostveils is beautiful, and a powerful omen. With great care, shamans sometimes harvest frostveils for their frozen spore-shards, which grant potent visions of the Otherworld when melted on the tongue.

In the frozen city of Geskleithron, frostveils are farmed and harvested by ice mephitis, so their delicate filigree bodies can decorate the frozen halls of Boreas’s elemental court. However, they are also sold on in the city’s black market to warm-bodied wizards and unscrupulous assassins to use as traps and guardians. Boreas’s stormy heralds and assassins, the thuellai (see the Northlands Bestiary), sometimes carry a pack of frostveils along with them on their hunts, but most blizzard demons are too violent and impulsive to make good use of the frostveils’ stealthy skills.