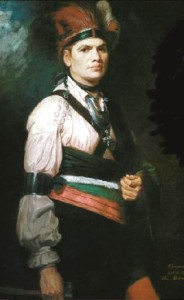 Tomahawks come in several forms, each with an intended purpose. Early ‘hawks, first made by Native Americans, were made of stone or bone attached to a wooden shaft with sinew or leather bindings. These early ‘hawks were primarily weapons, although some with sharp stone heads could have been used for skinning, de-barking wood, etc. When the Europeans arrived they began trading iron hatchets and axes with the Native Americans. These tools became known as trade axes. Small axes with similar construction made today are called camp axes or hatchets.

What Makes It A War Hawk?

Poll axes make a good camp axe, pipe hawks obviously can be used to smoke, but the spontoon ‘hawk and the spike ‘hawk are single purposed as weapons. While the spontoon version is more specialized, I find the spiked version more interesting because it’s similar to a war hammer… 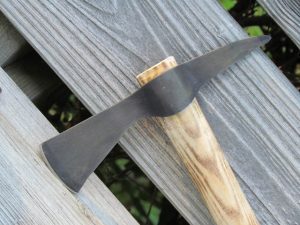 Why have both a spike and a blade? The blade is a cutting tool and as a weapon works well against bare skin or light clothing. Against heavy clothing — especially buffalo leather and/or buckskin in layers — the blade becomes less effective. Also, the blade is more likely to become stuck in bone because of its thin cross section and wedge geometry.

The spike on the other hand is thicker and less tapered. It’s traditionally not made with an extreme point, so while it can penetrate and transfer force even when it doesn’t penetrate, it’s less likely to get stuck. A disadvantage of this design is that when one sharp and pointy is aimed at the enemy the other is aimed at the wielder. While skill and awareness can greatly minimize a mishap, s**t happens in a scrap that can’t be planned for.

How’s It Made?
There are several ways to forge an axe (and we discussed on for the Danish ax), but to forge a spike ‘hawk you have only two viable choices: wrapping and drifting. We’ll save the details on drifting for another time, but basically the handle hole, or eye, is hot punched in a steel bar and the blade and spike are forged to shape.

Wrapping is accomplished by forge welding two flat bars together at one end, flaring out the other ends, and wrapping the middle of the bars around a teardrop, round, or oval shaped mild steel or iron bar. The teardrop-shaped eye and handle are the most traditional. After creating the eye the bars at the spike end are forge welded together, and the blade and spike are forged to shape. The shape of the eye is preserved by using a drift, but in this case the drift isn’t used to create the eye, just to maintain and enlarge it during forging.

I heat treat the blade to a relatively soft 50-52 on the Rockwell C hardness scale (RcH) because the blade needs to be able to handle heavy impacts without breaking. I leave the spike soft, because it may be subjected to even greater impact, and it is relatively thick and so unlikely to deform even in a very soft state. 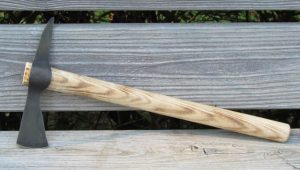 The pictured ‘hawk was cold blued in a 50/50 phosphoric acid and selenium acid mix, and mounted on a hickory handle that is lightly torched to bring out the grain.

How’s It Used?
This ‘hawk weighs only 18 oz. and is 18 inches long. The head is 8 inches long blade to spike. This is very small and light for a weapon of its relative power. There is no doubt that it could be used effectively as a primary melee weapon, backed by a large knife, perhaps a D-guard Bowie, or used in the off-hand to back a saber.

It’s a scary weapon, with tiny impact points driven at high speed at the end of a long handle. I’d avoid throwing a weapon that can be thrown back, but in a pinch it’s well balanced and flies true.