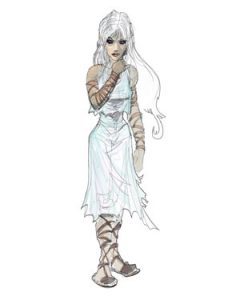 As part of the Journeys to the West project that’s currently in progress, Christina Stiles came up with the following description (with patron input) for the goddess Mnemosyne. Mnemosyne plays an important role in the Western Ocean’s story, since she rules the mysterious Morphoi Isle, and she is the wife of Nethus, the god the Kammaens have chained in Straboli. The Kammaens also stole Mnemosyne’s memories, a safety measure taken to ensure they could keep Nethus imprisoned. The goddess and her minions seek out the memories she lost by stealing those of individuals they encounter on the island or elsewhere. If Mnemosyne ever truly regains that which she lost, all hell will indeed break loose! But that’s an adventure for another day.

The below description of Mnemosyne might change slightly by the completion of the Journeys project, but here is the current vision of this important figure. Please note that her new domains (indicated with an asterisk) are in the process of being written, and Christina will also share those on the blog (as a Part II) as soon as they are available. (Art by Chris McFann) Enjoy!

The Universal Voice, She Who Has Always Been, Wife of Nethus, Mother of the Titans, Patroness of the Morphoi, Lady of Sirens, the Eternal Memory

When the elemental dragon Seggotan came into existence, long before the other gods, one other was with him: Mnemosyne. She was but an essence then—pure thought, pure memory—but she had been there before him, and he knew she would be there long after him. She was the true Keeper of Time, though he claimed the title. The aloof Mnemosyne offered up no resistance, nor did she seem to care.

Mnemosyne took her time in choosing a form, and she did not to appear in humanoid form (a female humanoid resembling a feylike, teenaged siren) on Midgard until the other gods had come forth, selected their masks, and chosen their heavenly and earthly domains. She spent some time in the Southlands, and the people there came to call her Yemaja. But, in due time, she fled the Southlands and settled in the little-traveled Western Ocean, away from the busy mortal races. Her chosen island was populated, however, with plantlike creatures, some of whom could shapechange. The shapechangers embraced the lonely divine spirit as their queen, and soon began worshiping her. The other plant creatures mostly ignored her, offering up their attentions to a being lording over the seas.

When the sea lord discovered her presence, joy filled his heart at her beauty and he became smitten with the coy woman-child. For years, he wooed her with his ocean song and bid his servants gift her flowers as beautiful as she and with an enormous marble temple. Nethus’s courting eventually won her over, and they wed. For a very long time, they were happy, and even produced several offspring, chief among them the titans and Charun.

Then, fifteen years ago, tragedy struck. The Kammaen Oracle’s soldiers attacked and kidnapped her husband, chaining him as a prisoner in their Theocracy of Straboli. The attack was twofold: The Oracle also sent her aggressors to capture Mnemosyne’s memory and to steal her newborn daughter as she was in the midst of childbirth.

Now, Mnemosyne does not recall her lost child, though she knows “something” besides her husband is missing. Her servants have all been cursed, and they do not recollect the truth of the events, either.

Worshipers
Mnemosyne is worshiped in the Western Ocean as Mnemosyne. In this area, her faithful include the morphoi, Mnemosynian matriarch lamias, lamias, sirens, merfolk, harpies, locathah, lorelei, and maereans. A few nethysule and humans have since joined her flock in the West.

In the South, Mnemosyne is worshiped as Yemaja, the protector of women and children. Humans, minotaurs, and a few other races revere her. Temples to her exist in the major cities of the South.

Mnemosyne draws no particular strength from the numbers who worship her. She is the universe in humanoid form. She is what is, what was, and what will always be. Because she is currently addled, her control of memory and time is precarious. Many of her faithful are naturally immune to time effects, however, so they have not suffered, but places immediately around her do experience time fluctuations.

Symbols and Books
The most common symbol of Mnemosyne is the figure eight, the symbol of infinity. Mnemosyne has no books of doctrine of her own. She transcends doctrine. Formerly, eight blind recorders (cousins to the Norns) filled never-ending tomes of information within her temple, but the Kammaens killed them. The assassins could not read the strange language of the recorders’ tomes (even with magic), but stole a few before burning the remaining ones.

Famous Shrines and Priests
The Temple of Mnemosyne of the Isle of Morphoi is the largest one, and it remains unknown throughout greater Midgard.

Other Faiths
Mnemosyne’s only true allies are Nethus and Charun. Some of the other faiths, especially Seggotan’s, know of Mnemosyne’s existence, but none of them interact with her flock. Hecate’s followers despise her, but know they cannot kill her, lest they unravel the threads of their own world.

What the Goddess Demands
The goddess demands her flock sift through the memories of others in search of the truth that has fled her. They must seek to free Nethus and unravel the mysteries surrounding the events of his kidnapping and imprisonment.