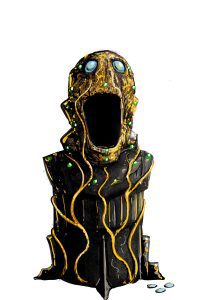 There are more things in heaven and Earth, Horatio,
Than are dreamt of in your philosophy.

Last week over on Dark Roads & Golden Hells, we hit a milestone: Thanks to new arrivals out here in the Great Beyond, we’re over 3/4 of the way (and a little more!) to commission. Our planar domain is infinite, however, so of course we’ve room for plenty more.

In the brainstorms we cast our nets far and wide for inspiration. Yes, there’s a lot of love for Planescape out here, but patrons are looking further afield and taking the planes in new and different directions: Concepts like Mount Meru and the Lovecraftian Men of Leng, to plane-hopping PCs being busted as illegal immigrants. We’re discussing sources from City of Lost Children and Spirited Away, to Alan Moore’s Promethea and Fallen Angel by Peter David. And we’re considering whether we might transplant the noir of The Third Man and Maltese Falcon, and espionage thrillers like The IPCRISS File, into the shadowy corners of Heaven and Hell.

It’s not all mood lighting either: Games like God of War, Devil May Cry, and Bayonetta have been mentioned as good examples of melding myth and the metaphysical with heroic action.

More details on two of the coolest ideas after the jump, plus a new monster for D&D:

The Great Game, age-old cold war between Heaven and Hell – that occasionally flares hot with hellfire and flaming swords. A deadly game of brinksmanship with mortal souls at stake and worlds both prime and planar as the board: Espionage and counterespionage, shadowy arms deals and surrogate wars with proxy forces; Jaded, cynical agents out on the edge, who have more in common with each other than their superiors; the looming threat of Mutually Assured Destruction if Archangels and Devil Lords get involved.

The Marketplace, a planar crossroads growing in a confused array of patchwork structures, a three dimensional maze of shops and stalls, where new markets sprout and spread like fungus and shoppers can wander into and out of many worlds. The oldest parts are not down, or up, or even out, but buried at the centre of its chaotic mass: The Depths, cancerous heart of the market where even devils fear to tread.

And yes, let’s finish with a little 4e planar wickedness:

“Unfortunately your companion has been… donated to our cause. I think you’ll find that he is legally the property of Mammon now.”

Dispatched by the Greedy King to gather tribute from the mortal world, tithe eaters are part devil, part test of character, and part trap. They closely resemble statues of precious metal studded with flawless jewels: Gold is the most common material, but other metals — from meagre bronze to priceless orichalcum — are sometimes seen.

Tithe eaters are hollow. Their mouths are always open; their bellies contain coins, gems, and other treasures. Anyone peering down its throat will see among this hoard a tempting item that they’ve always desired, just out of reach.

Tithe Eater Lore
DC 10:
Sacred to Mammon, these hollow statues contain offerings to the greedy god.
DC 15: Tithe eaters are devils bound in statue form. When a servant of Mammon fails to deliver its lord’s due tribute, the Master of Avarice turns them into precious idols to balance out their debt, and then casts them into the mortal world. If they can accumulate enough wealth, Mammon will transform them back.
DC 20: They move via teleportation. They swallow those who try to purloin their contents. They’re intelligent and can be bargained with, but are cruel and greedy.
DC 25: Tithe eaters are heavy, difficult to shift or damage. Other than their glaring eyes and clasping mouth, they do not physically move. Those devoured are lost to the mortal world, becoming slaves in Mammon’s hell.

Encounters
On Midgard, tithe eaters are encountered in treasure hoards or squatting atop Mammon’s altars. They pretend to be containers for treasure or relics, but often give themselves away by their smug grins or by following intruders around.

In his infernal realm, Mammon has countless cellars and warehouses stacked high imprisoned tithe eaters. Others can be found lurking like vagrants on hell’s street corners and in palace alcoves. These free eaters are often more talkative, swapping information in exchange for bribes. Like desperate beggars they’ll follow generous travellers around trying to panhandle more and better donations, ambushing the unwary if they stray from the beaten path.

TRAITS
Squatter
Whenever a tithe eater would be knocked over, it can make an immediate saving throw to avoid falling prone. Whenever it is subject to a pull, push, or slide the creature moves 3 squares less than the effect specifies (minimum 0).

Avaricious Withdrawal (Teleport)
Trigger: Tithe eater’s death
Effect: The tithe eater seems to devour itself completely, vanishing back to Hell along with everything of value within it. A target in its Devouring Jaws must make escape rolls until they are free or completely devoured.

Tithe Eaters in Combat
Talkative tithe eaters may attempt to trick PCs into reaching for the treasure in their bellies. Most prefer to feign harmlessness however, hoping someone’s tempted to look or reach inside their smiling mouths. After trapping enemies with their Devouring Maw, they use Devil’s Glare and Maleficent Misdirection to discourage others from interfering, retreating (taking victims with them) via Devil’s Lunge if necessary.

They prefer terrain with nearby cover for evading ranged attacks, and always target the wealthiest-looking enemy first.

Interested in more creatures and locales from the planes? Or chatting with Colin McComb, designer of Planescape: Torment and patron of the Dark Roads? Join the project today!

6 thoughts on “Planar Markets & the Eaters of Tithes”