Skip to content
Home / Delve into the Depths in the Kobold Blog / Frozen Empires: The Lands of the Ice and Snow 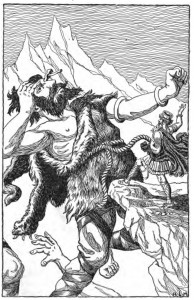 Shadows sweep across the land, black shapes under a steel gray sky. Wings dark as thunderclouds and armor flashing bright like distant lightning, the valkyries are riding out in search of heroes!

Welcome to the edge of the world, brave adventurers of Midgard. Frozen Empires: Glories of the North is the latest patron-lead project from Open Design, mapped into the World of Zobeck but easily adaptable to any campaign setting, detailing the icy realms of Vikings and daredevil heroes, of colossal giants and raging trolls, of silver-tongued skalds, potent runes, and howling spirits of the arctic wind.

First to pass beneath the hooves of our flying valkyries’ steeds is frost-dusted Trollheim, land of fearless warriors, glowering reaver dwarves, and liosalfar—elves of light who draw their power from the shimmering polar curtain. In Trollheim, you can raise a mead-horn in the smoky feasting halls of Jomsborg, Isle of Berserks, learn runes on song-filled Skaldholm, or brave troll mounds for the secrets of the grudge magic of the giants. Carve out a kingdom among the endless  warring of rival northern clans, pillage the southern coasts with a crew of raging barbarians at your side, or brave the ruins of Thorn, overgrown labyrinth of frozen sap and sword-length briars, where elven traps and eternally battling ghosts await…

Now you’ve earned a bold name, and One-Eye’s shieldmaidens wait keenly for your glorious death, so it’s time to set sail across the iceberg-dotted sea to Thule, the Last Continent; land of glaciers, geysers, and hot springs. Here, fire giants rule volcanic domains, frost giants stalk the glacial wastes, and the sun flees the sky for a quarter of each year.

Brave the mountains of Jotunheim, the kingdom of giants, where even gods walk cautiously. Explore the lost city of Issedon, crushed beneath a creeping onslaught of living glaciers. Brave the Caves of Gjoll, magma-lit entrance to the underworld, where the black waters of the River of the Dead become ghastly steam as it mingles with volcanic fire. Raid the treasuries of slumbering Amaroth… but make sure you’ve fled by autumn’s coming, for when the sun vanishes, the vampires of the Sleeping Kingdom rise to revel and hunt throughout the sunless months.

Beyond Thule there is only the Endless White, frozen sea inhabited by enigmatic ice nomads and spirits of eternal cold. From his Citadel of Ice, Boreas, god of the cruel North Wind, rules an army of glistening frost maidens, howling tempest spirits, and furious blizzard demons plotting to cover the world in never-ending winter. Opposing his polar host are the heroes of Hyperborea, a tropical lost world beneath the northern lights. At the edge of the world, mortal laws of nature bend and crumble: Here the sun rises and sets only once each year and Hyperboreans are born empowered by the Northern Lights. The earth shakes at the twitching of the encircling World Serpent, living colors dance in the air, and the lost world’s basalt crypts and ancient caves hold both treasures and horrors from a primordial age.

1 thought on “Frozen Empires: The Lands of the Ice and Snow”