Skip to content
Home / Delve into the Depths in the Kobold Blog / Prepared!: The Burning Crater 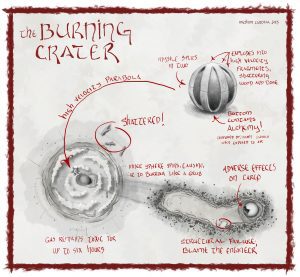 Cartography by Meshon Cantrill
The mountains are the border between our kingdom and the realm of the fire giants. Look far eastward—see how the peaks turn black? Their forges must burn night and day to mark the mountains so. Some mornings, sunrise dims from the smoke and soot. Long have we watched the pass and tallied our fortunes at its stillness. Recently, though, there are signs our luck is turning. Fiery orbs sail through the night skies and land too near these woods. Scouts report deep craters shrouded in smoke and ash. One sits a mere hour’s walk from this outpost. I fear the enemy makes ready some terrible weapon…

The Burning Crater is an explorable fifth edition location designed to offer a medium/hard challenge to four 9th to 10th-level characters.

A large crater smolders before you. Shattered trees and upturned soil sit in heaps around the site; a noxious white gas rises from the obscured bottom of the pit. All around the impact site are twists of glowing metal. Insects flee the area as you arrive; their chitinous escape is frenzied and audible.

The crater is 40 ft. across. The twists of melted metal provide no clues regarding their origin. The noxious gas is caused by an enchanted brazier at the bottom of the crater, and this brazier was designed to break away from the main projectile when it landed. The gas affects anyone in the crater or within 10 ft. of its rim, and it is magical (cast as a 5th-level spell) in nature, allowing it to be dispelled. The effects are as follows:

You arrive at the bottom of the crater. On your descent, you saw an abundance of metal shards sunk into the blackened walls. A freshly bored tunnel extends deeper into the earth. An oddly shaped brazier sits near the center of the crater; plumes of choking gas rise from its bowl.

The floor of the crater is 20 ft. down from the rim. PCs with the artisan (blacksmithing) background recognize that the brazier’s metalwork originates in fire giant forges. PCs can “disarm” the brazier with a DC 13 Intelligence (Investigation) check and then a DC 15 Dexterity (Sleight of Hand) check. Success ends the gas effects. If the PCs succeed the checks, read the following:

Your close examination of the strange brazier suggests superior metalwork combined with complex mechanisms and magic; a damaged impress on the bottom evokes the number 14.

A thorough examination of the crater in combination with a DC 13 Wisdom (Perception) check reveals a large piece of metal embedded in the crater wall.

Though warped by heat, a clear imprint of a fiendish wolf’s head surrounded by flame is visible on the surface of the metal wall.

A DC 15 Intelligence (Arcana or Nature) check recognizes the head is that of a hell hound.

The tunnel’s entry is 6 ft. in diameter. PCs standing in or near the entry find it uncomfortably hot.

The tunnel slopes slightly downward for thirty feet before ending abruptly. Intense heat makes the walls smoke, and exposed roots snap as they slowly burn. Shards of red hot metal protrude from the ceiling and floor. At the end of the tunnel is a pit roughly twelve feet in diameter. Inside the pit, a large metal ball has come to rest. The sides of the ball are contorted by the impact, and the interior of the projectile is exposed.

The tunnel presents a hazard to any PCs attempting to traverse it. The heated metal in the ceiling falls randomly and burns those who pass underneath. Passing safely between entryway and pit requires a DC 14 Dexterity (Acrobatics) check. A failed check triggers a DC 14 Dexterity saving throw to avoid 10 (2d6+2) fire damage; a successful save results in half damage.

The projectile’s contents can be seen from the edge of the pit. The projectile is dangerously hot, and climbing atop it is a foolish notion.
Inside the hollow metal ball are the remains of several large beasts. Their broken skulls and limbs suggests a canine shape. The unfortunate passengers have all perished.

The remains belong to six hell hounds launched inside the ball by a nearby fire giant stronghold. The giants’ experiment with a living payload has proven unsuccessful. Eventually, and likely just as the party discovers the metal ball at the end of the tunnel, a fire giant scout and his hell hound companion arrive at the scene. The giant’s duty is to investigate whether any of the hounds survived. The giant is happy to engage the PCs in combat. The general tactics of the monstrous pair are as follows:

The giant carries a leather satchel with some supplies for an overnight stay in the wilds. He wears a masterfully crafted steel gauntlet embellished with small rubies worth 125 gp.

2 thoughts on “Prepared!: The Burning Crater”