Skip to content
Home / Delve into the Depths in the Kobold Blog / Heavy Metal Bards: The Pros and Cons of the Skald 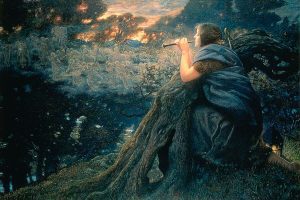 Bards have a long and storied history of being the butt of a party’s jokes. Fighters and barbarians fight, rogues and rangers skulk, wizards and sorcerers fling spells, and clerics make sure no one dies. What does the bard do? All of that, but none of it very well. While it’s possible for bards to become quite powerful, they have a bad reputation as a useless class, a waste of time, or, at best, something that’s only useful out of combat.

The skald is here to make those jokes stop.

What Is the Skald?

An easy explanation is that the skald is what happens when the bard seduces the barbarian, and they have a baby while Manowar blares over the mountaintops. Skalds are proficient with light and medium armor, shields, and simple and martial weapons, which gives them roughly the same choice of deadly instruments as the barbarian. Skalds gain damage reduction, rage powers, and the unique ability of spell kenning, which allows them to duplicate the magic of other spellcasting classes a certain number of times per day. They also get to keep the spells and knowledge abilities of the bard (well, most of them, anyway).

The biggest change is in the skald’s songs, versus a bard’s music. Skalds gain the ability to inspire rage in their allies (and themselves), and to assist allies in boosting their strength as well as clinging to life to fight on for a few more moments. One of the only songs both father and son sing is the dirge of doom, which is useful for debuffing your enemies when the blades come out.

So, in short, the skald is a combat bard. It keeps most of the skills, but extends the class’s combat prowess, the amount of armor a skald can wear, and also grants you rage powers like a barbarian along with Uncanny Dodge and Improved Uncanny Dodge.

What Does the Skald Give Up?

For players who like the idea of being support characters, but who want to get in and mix it up with the rest of the party, the skald is a solid choice. You have the ability to enrage your party in a good way (as opposed to how bards seem to make most parties react), and if you want to pick up a greataxe and start swinging then you’re perfectly capable of doing so.

There are a lot of things the skald can’t do in combat, though. For example, while the skald can still boost the party, the ways this class offers bonuses are much narrower than the ways the bard does with abilities such as inspire competence or inspire greatness. Perhaps the most notable defense the skald lacks, though, is countersong, which a bard can use to prevent party members from falling under the sway of any spells that depend on language effects.

Also, when the skald needs to do something other than put an axe into someone’s face, the class simply doesn’t have as many options as the bard does.

Even though combat is only about 1/3 of a Pathfinder game, it tends to get the most focus. While the skald gets a lot of skills and a lot of skill points, as well as the versatile performance ability, it trails behind the bard in some major ways. The bard’s jack-of-all-trades abilities is an extremely useful thing it didn’t pass on to the skald, and there are few abilities more useful than fascinate when you need to make sure the crowd is looking at you, and not at the rogue sneaking up the back stairs, or at the ranger who’s quietly kidnapping a lackey to interrogate the poor creature. Suggestion is also missing, which is an ability that has delivered a death blow to many plots, and saved a number of parties from certain execution.

At the End of the Day

When all is said and done, the skald is a support character who doesn’t feel like a support character. The skald can fight in melee, attack from range, use magic, and buff the party, but in a much more aggressive, Black Sabbath kind of way than the bard typically does.

Did the skald erase the bard from the playable ranks? No more than Airbourne playing music meant that no one liked AC/DC anymore.

42 thoughts on “Heavy Metal Bards: The Pros and Cons of the Skald”