Skip to content
Home / Delve into the Depths in the Kobold Blog / Book Review: Superposition by David Walton 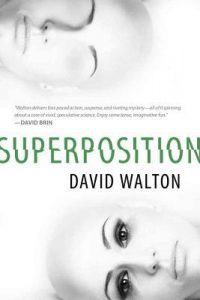 Jacob Kelly is a physicist, and his focus is on quantum physics. Things go strange when his womanizing coworker shows up at his home spouting nonsense about an alien quantum intelligence—while pointing a gun at Jacob and his family. Things escalate to an absurdly wrong point when this same crazy former coworker is found dead in an underground bunker near the New Jersey Super Collider where both of these men worked—and the time of death is on the same night that he appeared at Jacob’s house. So, Jacob is arrested on suspicion of murder. After doing some armchair detective work, it is discovered that Jacob’s former coworker was into some miraculous quantum technology and had encountered a quantum creature that doesn’t follow the rules of space and time as we know it. Jacob must solve this crime before he and everyone he loves are killed.

This book covers all sorts of categories, including but not limited to sci-fi, mystery, and thriller. Walton does a good job of tackling all of them but not an amazing job. The first hurdle that he had to overcome while writing this book was trying to explain quantum physics to a reading audience who’s biggest exposure to this interesting field of science is probably associated with saying something like “Sure I can do that, it isn’t like it is quantum physics…” For me prior to reading this book, that phrase and La Ron K. Jenkins Continuum series were my biggest exposures to this field. Jenkins, like Walton, did a good job of dummying things down for me, but quantum physics is still a tough pill to swallow. Throw in some Higgs Projectors, which James L. Young taught me about in the Vergassy Chronicles, and even though these elements were dummied down and pre-exposed, things were sometimes confusing on the quantum level. If I was taking a class in quantum physics, I’d want Walton to teach it. He acknowledged that it is a difficult concept and never made me feel like less than a person for not knowing such a daunting subject.

This book is much more than a quantum physics lesson, though, because it includes a mystery and some decent action. Jacob is the kind of character that you want to scream to not to go in some places or to not say or do certain things. I was glad to see that as soon as things went south for him that he didn’t suddenly turn into a combination of John Wayne and Sherlock Holmes, but I still found myself facepalming after a few of his choices. I didn’t exactly feel connected to him, but I do respect the fact that the author was consistent with Jacob’s character. There were several other important characters in the story, but to be honest, none of them got enough spotlight to really connect to. Even his daughter, who is mentioned in the book’s description, didn’t get near as much development as I felt like she should have received.

The mystery portions play out in a unique way when quantum physics are added. After reading this book, you will be very familiar with the term probability wave and exactly what it is. At times, things seemed way too out there to believe but I know that Walton held up the science as best he could. This isn’t one of those mysteries where you know who did it; instead you spend the whole book trying to figure out how and remain guessing up until close to the end. There are just enough suspects and plenty of motive to go around. The thriller parts of this book didn’t quite live up to the mystery or the sci-fi, but they were there and they were not bad. They didn’t have me on the edge of my seat as much as I would have preferred, but part of that might have been because some of the chases were the result of the realistic yet poor choices that Jacob made.

This novel is not for everyone: If you are completely close-minded to things like quantum physics, then stay away. If you just want a mystery with no science, unless it is forensic, again stay away. If you like a little bit of everything done well then jump in feet first. Walton is a good author who really knows how to explain some very difficult concepts to a mook like me.