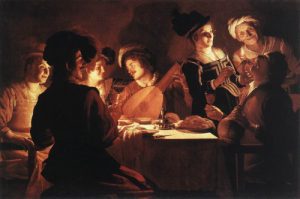 By now, you might have picked up or heard about the Advanced Class Guide by Paizo. We have author Neal Litherland venturing through some of the classes now, and he has a few ideas for upcoming blog posts. Which of the following blog posts would you prefer to see first? Take a peek at the short descriptions, then vote!

Martial Flexibility: The True Power of the Brawler
The Brawler class is one of the fan favorites because it opens unarmed damage to non-monks, but its true power lies in the martial flexibility class feature . . . if you know how to use it, that is.

What’s in a Name? The Swashbuckler vs. the Duelist
The Duelist has been a favored prestige class by those who want to bring the derring-do of a musketeer to the gaming table for years, so how is the swashbuckler different? Is it better, worse, or just a different way to play?

Heavy Metal Bards: The Pros and Cons of the Skald
The Skald seems, at a glance, to be an attempt to make sure no one will ever make fun of bards again. While it’s certainly tougher than traditional bards, what does this class give up for its increased combat prowess? And what will that do when you’re trying to solve challenges other than applying an ax to something’s face?

Has The Slayer Killed the Rogue AND the Ranger?
The Slayer was meant to be a class that combined aspects of the rogue and ranger classes . . . but did it do its job too well? The Slayer might just be better than both of its parents at what they tried to do.