Skip to content
Home / Delve into the Depths in the Kobold Blog / On the Road with Phileus J. Abbertale: Fire and Sand 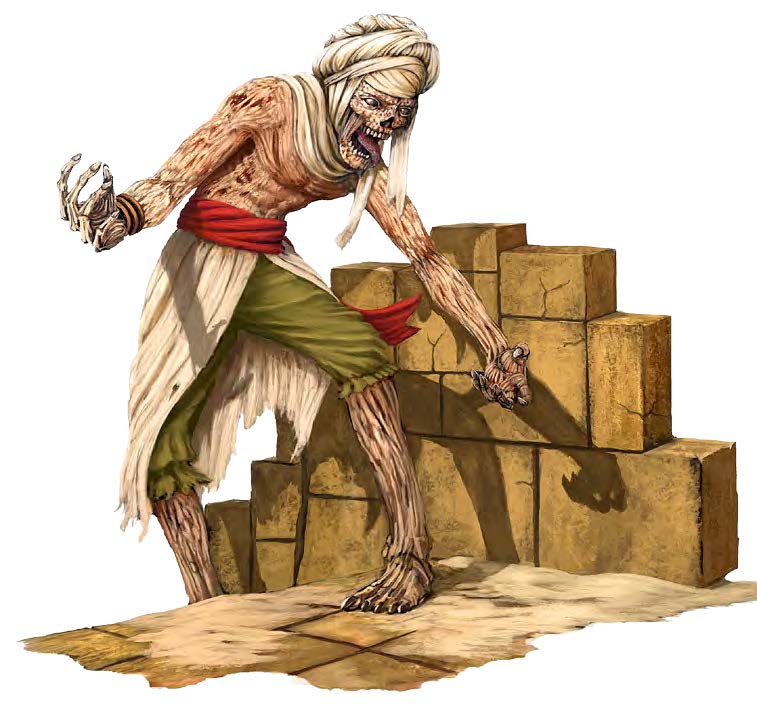 My uncle Reginald, a cosmopolitan fellow with a flair for the dramatic, regaled me throughout my youth with marvelous tales about his adventures in the Southlands. His stories of sleek sandships skating on the dunes, vast cities of the dead, and temperamental genies led me to dream of one day seeing these wonders firsthand. With visions of the sprawling sands dancing in my head, my burgeoning wanderlust finally grabbed me by the wrist and dragged me to the distant Crescent Desert. There I signed onto a caravan traveling on the Tamasheq Trail to the city of Saph-Saph.

Of course, Reginald wisely omitted telling me about the oppressive heat and the sun’s merciless rays. By sunset on the first day, I rued my decision to live out my uncle’s dreams, but Mahdi, the caravan’s grizzled leader, took pity on the inexperienced rube in his midst. In his thick Nurian accent, he taught me my first lesson.

“Men may forgive errors,” he said, “but the sands punish every mistake.”

I took his words to heart, though I never grasped their true meaning until our fateful encounter with a band of unfortunate souls who learned the first lesson of the desert—always pack twice as much water as you need—the hard way. At first, the sight seemed like a mirage. Twenty men wearing only the tattered clothes on their parched, weathered backs could not possibly be real. However, the seasoned guards among us recognized the shambling horde for what it truly was.

Skin resembling taut, waterlogged papyrus stretched over their lithe, skeletal frames, their desiccated lips momentarily parted to emit guttural moaning. With a rousing cry, the guards drew their blades in unison and rushed out to meet their foes, only to fall prey to the invisible terror beneath their feet. While charging across the sands, shrieks of pain instantly replaced their inspirational call to arms. The breeze carried the unmistakable stench of burning leather and flesh aloft as men and women inexplicably sunk knee deep into the searing sand.

A lone voice on the wind screamed, “Firesand!” (See my footnote at the end of this journal page for details about firesand.) Our advance abruptly halted, though the gray thirsters marched onward, unabated by the pliable, hot earth beneath their feet. The lifeless monstrosities and burning sand claimed twelve men and four camels on that terrible afternoon. When Mahdi explained the fate that caused these men to transform into undead abominations, I finally understood his adage about the desert. Not content to rest on his laurels, my mentor imparted an additional piece of his homespun wisdom.

“These were not ordinary gray thirsters,” the seasoned veteran relayed. “Never drink the same liquid twice.”

Once again, the cryptic message’s true meaning eluded me until I later learned more about stigmatized gray thirsters. (See my footnote at the end of this journal page for details about these variant monsters.)

In a final act of spite, a dying efreet may curse the ground he occupied, turning the very earth into superheated rock, gravel, and fine particles. Over many years, the desert’s shifting sands cover the blighted area, concealing any visible trace of the fiery conflagration beneath it. Nonetheless, the heat radiates through the sand up to the surface. In a hot and dry desert, like the Crescent Desert, the temperature difference between the air above the firesand and the surrounding area is very subtle. Therefore, it takes a successful DC 15 Wisdom (Perception) check to detect the anomaly. (In cooler environments, the creature has advantage on the preceding check.) When a creature moving on foot enters an area containing firesand for the first time or ends its turn there, the creature takes 2d6 fire damage and must make a DC 10 Strength saving throw. On a failed save, the creature sinks into the sand and is restrained, though it can use an action to end the restrained condition on itself by pulling itself free of the fiery grains. Firesand lacks the stability of ordinary sand and easily yields under pressure. Each foot that a creature moves through the firesand costs 3 feet of movement. Objects placed atop firesand, including buildings, ultimately sink beneath the sand.

Stigmatized. Before succumbing to the ravages of dehydration, some desert travelers resort to drinking their excreted bodily waste to stave off thirst. Unfortunately, imbibing these fluids hastens their demise rather than prolonging their life. Desert travelers who choose this extreme measure transform into a variant form of gray thirster when they die. Known as a stigmatized gray thirster, these undead monstrosities further burden their accursed souls with shame and humiliation.

Thirst. The gray thirster projects a 30-foot aura of desiccating thirst. The first time a creature enters the aura on its turn, or when it starts its turn in the aura, it must make a successful DC 12 Constitution saving throw or gain one level of exhaustion. If the saving throw is successful, the creature is immune to the gray thirster’s Thirst for the next 24 hours.

Putrid Bite. Melee Weapon Attack: +5 to hit, reach 5 ft., one creature. Hit 7 (1d8+3) piercing damage. If the target is a humanoid, it must succeed on a DC 12 Constitution saving throw or it becomes queasy. The creature has disadvantage on attack rolls and ability checks. At the end of each of its turns, it can make another Constitution saving throw. If it succeeds, the effect ends. A target that successfully saves is immune to this stigmatized gray thirster’s putrid bite for the next 24 hours.

Stigma (1/Day). The stigmatized gray thirster shares its humiliation and desperation in a 20-foot radius area centered on itself. Each creature must make a DC 11 Wisdom saving throw. On a failed save, the creature takes 9 (2d8) psychic damage and is filled with self-loathing. The creature doesn’t move or take actions on its turn. A creature who succeeds takes half as much damage and can move and act normally. Undead, constructs, and creatures with an Intelligence score of 4 or less are not affected. At the end of each of its turns, the creature can make another Wisdom saving throw. On a success, the effect ends, and the creature can move and act normally.

2 thoughts on “On the Road with Phileus J. Abbertale: Fire and Sand”