Skip to content
Home / Delve into the Depths in the Kobold Blog / Out of the Frying Pan: Desert Dragonkin 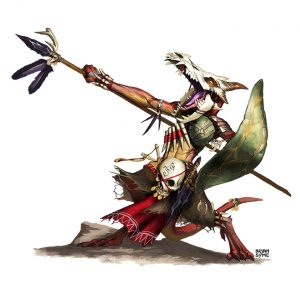 Encounter 1: Lizards in the Sun

While traveling the desert, the PCs find a group of kobolds tending to a pile of eggs. The kobolds attack on sight but quickly back off. Their numbers have been thinned, they are already bruised and bloody, and shards of fractured eggs are scattered across the sand. What has happened here?

The sun beats down hard upon your brow, and waves of heat ripple before you. Not a hundred yards away, though, you see a pile of football-sized eggs, surrounded by ramshackle barricades and stocky canvas tents. A kobold is moving one egg from a rickshaw onto the pile.

The walls around the kobold camp are about 50 feet in diameter but are only about 4 feet tall and can be easily jumped. They are made from destroyed crates and carts, and several kobolds are tearing apart their rickshaws and sharpening the wooden debris into spears. The kobolds attack the PCs on sight, no matter if they hail the kobolds or are spotted sneaking in. The kobolds surrender after losing half their number, even if they seem to be winning. 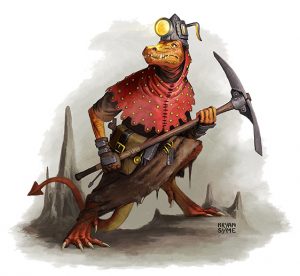 Encounter 2: Mutiny in the Ranks!

The leader of the kobolds, sincere and desperate mother called Low Queen Hau, orders the surrender. “We a’ too much on the ropes for fightin’! Spears down! Slings down!” She genuflects before the PCs and says, “We mean no harm, but… the eggs…”

Before Hau can reveal the secret of the eggs, a trio of hotheaded kobold warriors—named Lick, Krick, and Splick—kick sand in Hau’s face and shout that no true kobold queen would bow before the big folk. They refuse to let her speak since “This be a kobold matter. Shove off.”

Allow the PCs three DC 10 Charisma checks to break these kobolds’ will. Specific actions allow the use of Charisma-based skills, such as threatening the kobold mutineers allows the PC to make a Charisma (Intimidation) check. If the PCs make three successes before three failures, the mutineers are defeated and grudgingly allow the PCs to speak with Hau. If the PCs fail this challenge, the kobolds snarl and attack again (minus Hau, one kobold).

Developments. If the PCs successfully defuse the mutiny, Hau speaks to them at the beginning of Encounter 3. If combat resumed, run Encounter 3 concurrently after 2 rounds pass.

Eggs? Hau’s kobolds are transporting a clutch of dragon eggs—that they stole from a blue dragon—back to their warren, two days from their current location, so that they can raise the dragons as their friends instead of their masters. One egg hatched earlier in the afternoon and attacked the kobolds; many believe that the eggs are too dangerous and that they should smash them instead and sell the shells as trinkets.

Encounter 3: Scramble for the Eggs

A loud crack rings out from the pile of eggs. One blue dragon wyrmling emerges and starts attacking the kobolds. As a newly hatched wyrmling, it cannot yet breathe lightning, reducing its challenge rating to 2 (450 XP). Another egg hatches every three rounds until three wyrmlings have hatched. After that, no more hatch until 24 hours have passed. After 24 hours, the GM can choose to have as many eggs hatch as they please.

After the sudden hatching, seven eggs still remain unbroken, and Low Queen Hau is adamant: the eggs must be brought back to the kobolds’ warren. The kobolds and the dragons must live together as equals.

Developments. After the attack, the PCs have the option of leaving kobold matters to the kobolds or helping them transport the stolen eggs. Of course, mortals who play a role in the theft of dragon eggs rarely escape the dragon’s notice…