Skip to content
Home / Delve into the Depths in the Kobold Blog / Howling Tower: Setting the Hook 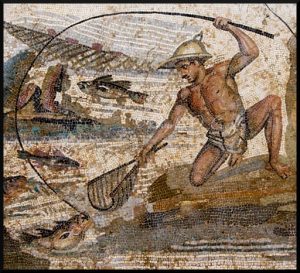 Adventure hooks are the grease that keeps a fantasy roleplaying game campaign moving forward without snagging up between adventures. When hooks work properly, one adventure meshes into another like the cogs in a fine transmission. Players transition from the third adventure to the fourth adventure like Steve McQueen upshifting from 3rd gear to 4th.

In an earlier post on Baiting the Hook, I described how the best way to set hooks in your players is to bait them early. Even with early clues, the time comes when the main attraction needs to be kicked off. Whether you’re looking for the final tug that fully sets a hook in the players or just a different way to dangle some bait, the following list of incidents provides plenty of options.

A past acquaintance in trouble. This is a staple of TV. The friends of private detectives and police inspectors seem to draw trouble pretty regularly. The advantage of using a past acquaintance is that the characters probably already trust the person. You don’t need to waste time establishing that he or she is on the level—although sometimes, that uncertainty is desirable.

Conversation in the tavern. It’s an oldie but still a goodie. The local inn is a vital part of a small economy. It’s where locals can chat up travelers (such as the PCs) who might be the only source of news in a small community—or the only source of interesting news, anyway. Likewise, it’s often the best way for travelers to find out what’s shaking nearby. Let your players sneer at the stereotype all they want, but encourage them to nurture local contacts this way.

A weasel with information to sell. The paid informant is another staple of crime stories. Many D&D adventures fit that mold, with the characters filling the roles of cops and crooks in about equal measure. The informant might be a retired adventurer, the down-and-out survivor of a failed expedition, a condemned criminal, or a scholar who stumbled across something in the church archives that was meant to be buried for all time.

A prisoner bargaining for freedom. Heroes who infiltrate enemy territory frequently wind up with captives who undergo “questioning.” Most captives know their future is grim, so it’s only natural that they try to bargain for their lives with whatever bartering chips they have. Creatures that live around ruins, crumbling subterranean civilizations, and mystical forests are bound to know things that could be of value to adventurers.

A rock thrown through the window. It doesn’t need to be a rock, specifically; any anonymous delivery system can work. A message automatically picks up an extra level of mystique when it comes from someone too frightened to step forward into the light, just as it becomes more alluring when it comes from someone who’s trying to frighten the characters away instead of draw them in (as 43 years of Scooby Doo will attest).

A bird flown through the window. This is really just a twist on the rock through the window, but one with an air of respectability. Birds, other animals, ghosts, and flaming letters in the air are all good. If the animal can talk, so much the better.

A mysterious patron. Replace a mysterious talking bird with a mysterious entity that presents itself as a person—a representation that the characters might or might not believe. Either way, a dose of mystery makes any patron more appealing.

A dream or vision. I caution against overusing dreams and visions; a little bit of prophetic dreaming goes a long way. Used sparingly, an invasion of a character’s subconscious can be an excellent motivator.
Legend or prophecy. Basically a dream or vision that is screened in an NPC’s head instead of a player character’s. Delivering the message through an oracle adds a nice classical (as in Greece) ambience to the proceedings at the cost of some immediacy.

Old papers found during research. I’m a big fan of sending characters into dusty libraries and temple basements to conduct actual research on legends, rather than having some hoary old sage just tell them everything they need to know. When the PCs go into the stacks or the back alleys, there’s no telling what they might “find.”

An intercepted message. Any of the messages mentioned above, be it a talking ferret, a note wrapped around a brick, a magic mouth, a conversation in the tavern, or even a dream, might have been meant for someone else, not the player characters. A captured courier might spill the beans, or someone might find a note sewn into the lining of a corpse’s doublet. Reading someone else’s mail can be more exciting than reading your own.

An anonymous posting. A handbill tacked to a tree is the fantasy equivalent of Craigslist. As with any want ad, the #1 rule is “buyer beware.”
Refugees. As trouble advances, it usually is preceded by a wave of innocent civilians running away from it. The first news that characters hear of approaching evil might come from displaced farmers, merchants, and artisans as they flee for safety. Unfortunately, the typical refugee is not a reliable source of information; most will be fleeing because everyone around them is. Finding a real witness who can give an accurate description of what’s causing the flight can be a challenge, and until that person is found, characters will hear all sorts of wild tales.