Skip to content
Home / Delve into the Depths in the Kobold Blog / Out of the Frying Pan: Demons on the River Argent 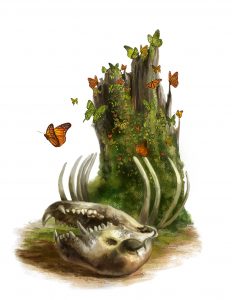 Encounters have consequences. Every slain bandit has friends who want revenge, and every devil banished back to the Eleven Hells reports its failure to its Dark Lord. What happens when the PCs’ daring deeds come back to bite them?

The River Argent may well flow with gold for the wealth it brings to Zobeck—and the entire Crossroads. Even the trade traffic of the Great Northern Road pales in comparison to the procession of barges that ride the Argent’s current. As the PCs are traveling on or alongside the mighty river, they witness an unusual sight: an elven boat made of pure silver.

The waters of the River Argent are choked with boats—merchant ships, ferries, barges—but a boat of pure, shining silver parts the traffic, sailing ahead with white sails unfurled. The gleaming riverboat slows to a stop beside you and a silk-draped elf emerges from belowdecks. He turns to look at you with wide, pitch-black eyes, and you hear his dulcet voice in your minds: “I am being followed. I am wealthy. I need your help.” The elf looks away and returns below.

The elf, named Illané, is a male shadow fey enchantress (Tome of Beasts). Recognizing that he is a shadow fey from his brief appearance requires a DC 17 Intelligence check, though characters who have encountered shadow fey before automatically succeed on this check. A week ago, he slaughtered the high elves within the boat and dominated the helmsman. Now captain of the ship, he seeks out powerful mortals and entices them to board the ship, only to cast them into the Plane of Shadows, where they are sacrificed to Alquam, Demon Lord of Night (Tome of Beasts).

If the PCs meet him belowdecks, they find Illané sitting in total darkness as he waits. He feigns urgency as he lights a dim oil lamp and invites them to hear why he is “being pursued by agents of evil.” He attempts to surprise them; he draws a short sword and whispers, “The night claim you,” and attacks. His attacks with the sword have +5 to hit, deal 1d6 + 2 piercing damage, and a creature hit with an attack must make a DC 15 Wisdom saving throw or be teleported to the reflection of the River Argent in the Plane of Shadows. While attuned, the sword’s wielder can summon all banished creatures (that are still alive) to their current location as an action. This sword is a very rare magic item.

If Illané was killed, his flesh instantly melts away, leaving nothing but a pure-white skeleton. Within his ribcage is a swarming mass of tiny crimson wings: a greater death butterfly swarm (Tome of Beasts). After a beat, they swarm out and attack the nearest living creature. If this encounter takes place in the Plane of Shadows, the PCs find this swarm slowly devouring the corpse of a glabrezu demon.

Illané did not lie when he said he was being pursued. He gained his magical power from a pact with Alquam, Demon Lord of Night. In exchange for this power, however, the shadow fey was commanded to sacrifice four mortals with “powerful souls” to the Lord of Night before each new moon. Failure—as the languid, self-sure Illané had this month—carried consequences… such as his heart being instantly devoured by flesh-eating butterflies.

Encounter 3: A Debt Must Be Paid

Illané owed a debt of souls, and Alquam intended to collect in full. A pack of vrocks out to claim his soul land on the ship’s deck and begin searching for him. If the demons find the PCs, they grow angry that the PCs let their quarry’s soul escape and fight to the death unless the PCs can bargain their way out.

Developments. If the PCs succeed, they have gained the passing attention of a powerful demon lord. Sending minions to kill them and thus provoking the PCs further is out of Alquam’s character. He instead seeks out past enemies of the PCs and, if dead, offers them a second chance to kill them. If alive, he offers them abyssal reinforcements to aid their vengeance.