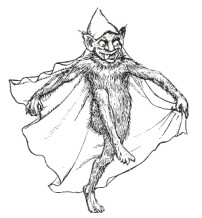 Last time, we went over a quick system for mutating your monsters so that they can provide a more unknown challenge for your player characters to face. Let’s take a look at a few examples, starting with the humble goblin.

For starters, goblins are not CR 1. To get there, they need 2 player character class levels. The stats below reflect a 15-point buy, the goblin template located here, and 2 levels of rogue, which are highly favorable for our nasty little foes. Evolutions are as follows: 2 points for winged flight, 2 points for poison attack, 1 point for reach (total: 5 points). Replace the skilled racial trait with hard head, big teeth for a 1d4 primary bite attack. The reach attack is bite. Add the Fly-By Attack feat, and use Weapon Finesse for the 2nd-level rogue trick. So, how did our newly created bitewing goblin turn out? Take a peek at the statistics block.

I picture them as being adapted to the jungle, using spears and shields in hit-and-run melee while staying out of an opponent’s reach. When in small groups, the opening gambit could be dropping a net to entangle their foes during a surprise round, or landing on the far side of a covered pit and taunting enemies into a disadvantage. Generally, they’d use their poison, flight, stealth, and the environment against their foes.

For CR 2, worgs are already fairly tough with the ability to speak despite their canine form and their ever-so-dangerous improved trip ability. The weakness of worgs is their pitiful AC of 14—unless the players are rolling particularly poorly, the PCs will hit and hit often. I focused on making our worgs sneakier and a little harder to hit than standard without addressing the AC issue. Evolutions as follows: 2 points for shadow form, 2 points for shadow blend, 1 point for skilled (Hide). I also traded Con from 13 to 11 for a loss of 4 hit points to buy two additional tentacle attacks (total: 5 points). Now let’s take a look at the result: the shadow worg.

Perhaps this is the offspring of a shadow mastiff and a worg. This creature could lead a pack of regular worgs and get a bunch of CR 2 flanking buddies, or he could be the mount to an evil goblin or kobold cavalier. The trip attempt with the bite attack is resolved first since this is a primary attack. The tentacles are secondary attacks and are rolled after the primary attack is resolved. Thus this worg can beat up tripped opponents with the appropriate bonuses for their opponents being prone.

Trolls represent a step up in monster quality. This is a level where wizards get fireball and most warrior builds have 2–3 attacks and some very good buffs. Trolls don’t need much of a boost to make them more dangerous since they already have the amazing power of regeneration, their size, and their rend attacks. Evolutions are as follows: 2 points for an extra pair of arms, 1 point for claws (total: 3 points). This improves the chances the trolls are going to rend, which makes them more dangerous than ever to engage in melee combat. Since the only change to the stat block is two more claw attacks made at the exact same bonus, I will refrain from a full stat block on the Kali troll.

Tactics can be more interesting with four arms, too. A Kali troll can make a grab attempt, then attack with the claw, claw, and bite, for example. To be fair to players, roll the claw attacks in pairs since the rend ability should work only with the opposite claw.

Kali trolls are cannibals—these trolls were forced to consume other trolls (stomach acid damage is still acid damage.) To gain an extra pair of arms, they had to have consumed at least three other trolls. If they continue to eat trolls, they grow other arms, claws, hit dice, and BAB. Bards sometimes sing the origin story of the Kali trolls as an army caught in a mountain pass during a blizzard—only a few dozen trolls emerged from this particular precarious situation.

If you didn’t catch last week’s civilized monster template you can read about it here. If you opt to use the option I outlined in that blog post, you’ll find that civilizing one or a few monster races can add a great deal of depth to your campaign, but I caution against overdoing it. Templates are like a spice that you add to your encounter recipe: For the best results, restrain yourself from applying too many or overusing one. If your kobolds are sipping tea with raised pinkies at 4 p.m. sharp, consider avoiding doing this with your orcs, for example. And, when it comes to mutating monsters, bear this in mind as well!