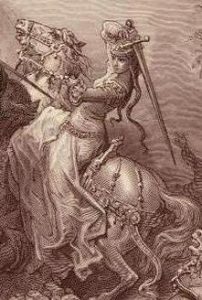 “The mind is a curse. I lift its burden from you.”

The fugue is a state of maniacal revelry where one is ignorant of external events. It exists entirely in one’s own mind. Hours, days, or weeks might pass before the fugue passes. In that time, you may take actions or travel long distances without realizing it…

You are a fugue warrior. You give yourself over to madness and insanity, so your god may act through you. The deity takes control of your intellect and reason, and you simply act out his wishes. When you awake, your foes are dead, and you have travelled halfway across the world.

Psychic Brand (11th): Targets of your divine challenge and ardent challenge take psychic damage equal to 1 + your Charisma modifier whether they attack you or not.

Crazed Injury (16th): Once per encounter, when you are bloodied, you gain temporary hit points equal to your level plus your Charisma modifier.

Your holy symbol sings with the inchoate noises of the outré realms and drives opponents to hysteria.

Target: Each enemy in burst.

Attack: Charisma vs. Will.

An attack on your psyche matters little when you are already insane.

With a strike from your weapon, your opponent now imagines itself a helpless, aged creature.
Daily • Divine, Illusion, Reliable, Weapon
Standard Action                               Melee weapon
Target: One creature.
Attack: Strength vs. AC.
Hit: 4[W] + Strength modifier damage, and the target is slowed and weakened (save ends).
Special: If the target is subject to your divine sanction, it takes a −2 penalty to saves to end these conditions.