Skip to content
Home / Delve into the Depths in the Kobold Blog / Of Godly Might: Clerics of Boreas (Part 2) 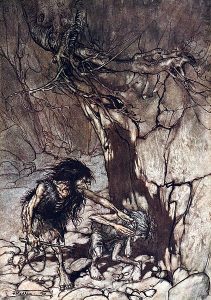 Priests of Boreas operate primarily in isolation outside the confines of a structured organization. There are no granted titles, offices to hold, sacred vestments, or even physical structures in which to worship. Supplicants of Boreas seek him out at the tops of snowcapped mountains, on the ice floes of the Frozen Reach, and amid the acres of barren tundra of the Bleak Expanse. A victim left naked in the chilling night air to suffer the ravages of exposure is especially pleasing to Boreas, but his priests who do not condone torture may instead choose to offer sacrifice in the form of self flagellation during the coldest hours of the night while their lower body is either submerged in icy water or buried to the waist in a snowbank. Boreas can also be appeased by a yearly sacrifice made at the time of the Boreal Dark in which a weapon imbued with a unique frost ability or a scroll containing a newly created cold spell is thrown into the icy waters of the Uttermost Sea. In addition to these varied sacrifices, Boreas imposes one taboo upon his priests—they are not allowed to enjoy the warmth of a hearth fire. A priest of Boreas who spends the night singing and dining at the hearth with companions may well find himself without granted spells the next day. Boreas allows the use of fire for heating food (when necessary, for a real warrior consumes food raw) and for providing warmth (when freezing to death would be the alternative, for a superior specimen can survive with furs and a well crafted snow hut), but using a hearth fire for pleasure is strictly forbidden.

Most of Boreas’s priests follow a duel path: they are most often cleric/barbarians, cleric/druids, or cleric/rangers. These paths best prepare such individuals for a harsh life in the Northlands where many act as guides, hunters, trackers, and village apothecaries. Less frequently, a sorcerer or oracle will add their talents to Boreas’s flock of followers. Regardless of the individual path chosen, all priests of Boreas obtain some level of training in cold weather survival, including foraging for sustenance and knowledge of dangerous wild animals, for there is no place for an individual who cannot survive the extremes of a snowbound world in the ranks of Boreas’s followers. Additionally, three invocations are taught to all priests of Boreas. “Whitecover nears” is the greeting offered a fellow priest which alludes to the prophesied day when Boreas covers all of Midgard in winter. “Be lost to the frost” is the battle cry issued when engaging an enemy. And finally, “endure, embrace, evolve” is the litany chanted when making a sacrificial offering; hone your body so that it is strong enough to endure the cold… cultivate a desire to embrace the cold… and if these conditions are met, and Boreas shows you favor, evolve into a superior being that is one with the frost bitten land.

These traits are available to priests of Boreas.

On the night you were born, a magically conjured blizzard was sent to ravage your village, bringing with it bitter cold and violent winds.

Benefit: You retain a unique connection to storms; you cast any spell that has either the cold or air descriptor at +1 caster level.

You were born in Jotunheim, and somewhere along the line, giant blood was introduced into your lineage.

Benefit: You gain giant as a bonus language, as well as a +1 trait bonus to your Strength score for the purpose of calculating your carrying capacity.

You were born in Trollheim, and somewhere along the line, troll-kin blood was introduced into your lineage.

Benefit: You gain giant as a bonus language, and whenever you are subject to natural healing, such as when you rest overnight, you gain one additional extra hit point.

As a devotee of Boreas, you have spent much of your time climbing ice encrusted mountains and traversing miles of iced over waters.

Benefit: You gain proficiency with the light pick, and ice is not considered difficult terrain for you (that is, you are not required to make Dexterity checks to traverse ice normally).

Just as your god Boreas is bent on a single purpose, you too do not give up on a task once it is begun.