Skip to content
Home / Delve into the Depths in the Kobold Blog / Lackeys, Hirelings, and Henchmen 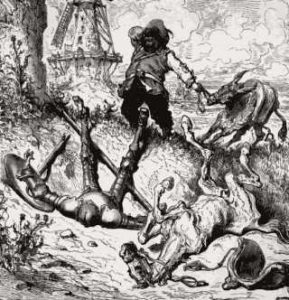 Melchior huffed and puffed around the last corner. Even though he’d be dressed down for loafing, he felt a genuine affection for his employers. He skidded to a stop. The dragon, who was devouring Fargrim the Chaste, raised his head to gaze at him. Melchior pushed his helm (a well-seasoned dinner pot) higher on his head, smiled weakly, and started to back away. It was then that he realized he was going to have to look for another job.

If your campaign needs a shot in the arm, consider adding a few well-placed NPCs. Give that irresponsible party-splitter someone to take care of. Or plant a secret plot device with those know-it-all veterans. If you think about an adventuring company as a party of low-level European nobles, it’s not odd to picture them traveling with a group of helpers.

Since the creation of our favorite game, each succeeding version has minimized the role of these most useful of NPCs.

A lackey is someone who does menial tasks or runs errands for others. In a fantasy setting, this might also mean a creature that would be considered a monster. A party might start with one lackey and soon have a lackey for each player. The lackeys would then report to a henchman. Typically, lackey wages might be 3–5 sp/day and would include many of the following tasks:

Lackeys are unarmed and poorly equipped. Their employers are wholly responsible for their care and feeding. Lackeys would certainly only speak when spoken to and would dine apart from the party. During combat, lackeys should run away unless trapped and would give the players no advantage in combat.

Lackeys should have names and a minimal back-story. They can interact with their employers but should only serve to make the characters lives easier, not harder. Lackey’s should be played by the GM and could be a source of hidden plot devices (and fun).

A hireling is a person who typically has a skill or trade and is hired to perform a specific task. By obtaining hirelings to follow them around, an adventuring party could fill gaps in the party with a cleric or even an artificer. Hirelings are responsible for their own equipment and food. At no time should hirelings be exposed to danger. Typical hireling jobs and prices per day follow:

A higher-level adventuring company might have a lair or property where they may hole up. Any masonry or carpentry would be hired out. Also, it would be customary to have a caretaker or steward look after the place when the party is gone. Certain hirelings can be retained on a monthly basis at a discounted price.

A henchman is a trusted follower or right-hand man and should be desired by the experienced player. They should be paid a hefty sum up front, then a percentage of the loot afterwards. Their loyalty is based on the characters Charisma. The higher the Charisma the lower a percentage the player would pay and the more loyal the henchman would be.

Henchman should serve as a buffer between players and townsfolk in many situations. Loot must be fenced, gear repaired, rumors gathered, provisions restocked, and tributes paid.

It’s certainly advisable to protect henchmen, but at some point, they may have to face danger. A henchman might act as a page or squire for a warrior but not as a mercenary. Depending on the employer’s Charisma, henchmen may be more resistant to the GM’s machinations. For party purposes, you could share expenses for henchmen and lackeys.

Henchmen can be volunteers, or they can be solicited. The players can post notices, hire a crier, or recruit someone from a tavern. You can even have a missing players’ character serve as a henchman for the session.

(This article first appeared in Kobold Quarterly #17. Check it out for yourself.)

40 thoughts on “Lackeys, Hirelings, and Henchmen”