Skip to content
Home / Delve into the Depths in the Kobold Blog / Death Among the Dunes: Desert Monsters 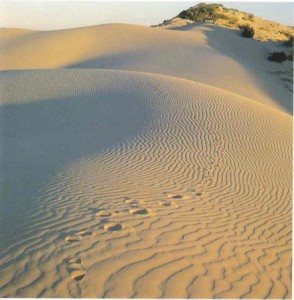 Author’s Note: Starting with this entry, I will be creating my monsters using the Pathfinder system rather than Dungeons & Dragons, 4th Edition. The Pathfinder stats for the first monster in the desert monsters series, the blood snake, can be found at the end of this article, and its story-oriented text is in the original article.

Thirst is a deadly and ever-present threat to desert travelers. Very little water can be found among the dunes, and some foolish souls fail to adequately supply themselves with it before beginning their journeys. Such travelers are never heard from again, and their personal effects and sand-flayed corpses often litter the desert sands for centuries before they’re discovered.

Not everyone who dies of thirst in the desert remains in a sandy grave, however. Some desert explorers, for reasons ranging from sheer greed to a desire to see their loved ones again, possess a will to live so strong that a spark of it remains in their desiccated corpses. This remnant of the primal survival instinct eventually causes the corpse to rise from the sands, shambling across the desert in an endless search for water that can no longer sustain it—water sucked from the bodies of other desert travelers. The terrified survivors of such attacks call these beings the ever-thirsting.

Ever-thirsting attack in packs, despite the fact that individual ever-thirsting often rise from different graves, sometimes separated by many miles. How these mindless beings find each other among hundreds of miles of desert is not known. Their main attack is a vicious bite, instinctively aimed wherever it will cause the most blood loss. Their own desiccated nature also serves as a weapon, for their sand-like blood sprays from their wounds with enough force to flay a man’s skin off. Once they’ve killed their prey, ever-thirsting sate their unnatural thirsts by meticulously sucking the corpse dry of water through its open wounds.

SPECIAL ABILITIES
Sandblast (Su) As an immediate action after taking damage, an ever-thirsting can cause a sandblast to erupt from its body. The sandblast functions as a breath weapon (10-ft. cone; 1d10 damage; Reflex DC 13). The save DC is Constitution-based.

TACTICS
Simple pack attacks are as complicated as ever-thirsting tactics get, with several ever-thirsting targeting individual party members and biting them en masse. While they have enough of a survival instinct to hunt for water, they are heedless of pain or danger, and they will fight to the death.

Sandswallow (Ex) A blood snake can use this power to burrow under the desert sand. It gains concealment (DC 20 Perception check to detect) and can make a Stealth check as an immediate action after using this power.

TACTICS
A blood snake always starts its attack while hidden by using sandswallow, relying on the element of surprise to deliver the first bite attack. After its victim is paralyzed, the snake delivers coup de grace bite attacks until it consumes the victim’s heart, which occurs with the attack that kills the victim.

3 thoughts on “Death Among the Dunes: Desert Monsters”