Skip to content
Home / Delve into the Depths in the Kobold Blog / The Far Side of the Table: Slew of Ones 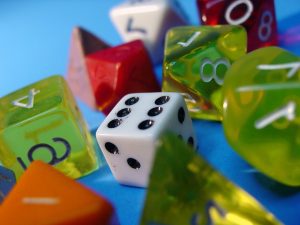 Far beyond the hand drawn maps, snacks, drinks, and miniatures there towers a grand screen, littered with secret notes and diabolical schemes. This article is designed to break down decisions GMs often encounter while running their adventures as well as provide amazing ideas to showcase at your own games. Sharing my own experiences as a GM in both Adventurer’s League play and Ordos—my Dungeons and Dragons world—I seek to provide insights to those just starting as a GM or who have been GMing for years. While my own adventures use 5th-edition rules, many of the topics or themes mentioned here span across the genre.

Welcomed by the howl of wolves, our heroes Val (devious rogue), Tyrash (paladin of Bahamut), Zenith (fiery wizard), Strass (burly barbarian), and Shump (soft-spoken ranger) are crouched beside a fire on the road.

Welcome to the table. More than twelve natural 1s were rolled during the session, and the night went poorly for my players. In the wake of such poor luck and player destruction, let’s talk about turning player failures into minor successes.

What is a player failure and when or how can a GM use these to promote “fun” moments? Is there a limit to how often this should happen?

Slowly the glittering mass of hungry eyes circled around our heroes. Soon snarling howls filled the air and the adventurers knew that they had only seconds before they were attacked. Val lit his torch on the flames, Zenith summoned his pseudodragon, Tyrash prayed for a blessing, and Strass roared in defiance, a barbarian until the end, rushing off into the darkness. Startled, the others jumped up to join him.

Player failures come in many shapes and sizes. From attacking one another, failing to jump over a crevasse, or simply charging off to certain doom in the dark, GM’s field these experiences constantly with varying degrees of success. In this scene, I wanted to ruthlessly attack my players, wielding the might of wolves and a single werewolf to give a taste of the dangers ahead.

When Strass ran off into the darkness, I was fully prepared, and I wasn’t going to let Strass gain the support of his allies that easily. Everyone else had already performed an action—torch lighting, summoning, and praying—so when Strass charged forward, the whole table was a little surprised. I called for everyone else to roll. If anyone rolled above a ten on their Dexterity, they could chase after Strass this turn. If everyone failed, then Strass was going to be alone for a moment. 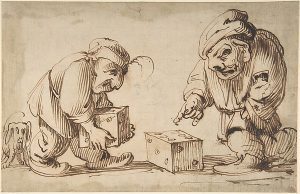 Actions are really important when categorizing player failures and so too are dice rolls. A natural 1 means that a player fails their action but doesn’t mean that the character does nothing. In Val’s case, he tripped, kicking over parts of the fire and burning his foot for a few damage. Player failures lead to bad results, and players are often punished for them, and those punishments come in all forms. In this scene, Strass will be surrounded by wolves because he made a brash action. Val has already lost health because of a bad role.

But this needn’t happen every time.

The werewolf fought viciously, flaying with its claws and plunging its teeth deep into Strass’s arm. Screaming in a wild rage, Strass retaliated, oblivious to the arcane magic flying from Zenith or Tyrash’s shouts of pain. Strass swung his weapon high, trying to cleave through the werewolf’s neck.

A 1 gives the GM a chance to alter the entire battle, increasing the tension and redesigning the objectives of the scene. Best of all, a natural 1 makes these alterations feel natural as every player at the table expects bad results. Saying “you miss” doesn’t express the gravity of failing. In this scene, a 1 could mean that the hilly ground gives way or that the fire spreads to nearby trees or perhaps a horse and rider surge past distracting Strass while being chased by wolves. Here is what I chose…

Strass’s axe swung with blurring speed, whirring out of the barbarian’s hands and into the side of a nearby wolf. Yelping in pain, the beast began limping away, its side horribly wounded.

If I had said, “You miss,” nothing in the game would have changed, the scene would’ve stayed the same and possibly grown monotonous. Player failures offer chances for roleplaying or objective changes. For our game, Strass did hit an enemy, but now suddenly, he is facing the werewolf with just his fists and his axe is slowly limping off into the darkness. Strass now faces some difficult choices as does the rest of his party.

The fight was gruesome and long. The black head of the werewolf lay nearby the fire. Tyrash lays his hands on the torn figure of Val, and the deep wounds began to slowly close. Strass stood nearby, spitting blood on the ground, and Shump calculated the toll: three bitten by the werewolf.

Player failures come at a cost but not always as a mundane statement or outcome. Some of the best stories can be told through mishaps and screw ups, especially if they also happen to the monsters.

9 thoughts on “The Far Side of the Table: Slew of Ones”