Skip to content
Home / Delve into the Depths in the Kobold Blog / Monsters of the Greek Heroic Age: Medusa 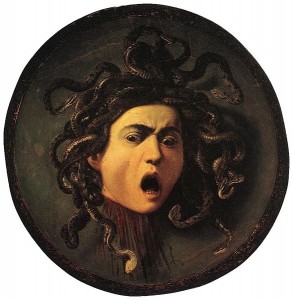 The medusa awaits you beyond the jump.

Legend states that Medusa, a priestess of Athena, was once incredibly beautiful, mostly due to her long, silky hair. She bragged that she was more beautiful than the goddess, Athena. One day Poseidon ravaged her in Athena’s temple. This enraged Athena and she cursed Medusa, transforming her into a Gorgon. Her beautiful hair transformed into snakes and she became so ugly that her mere gaze turned onlookers to stone.  Only by viewing her reflection is it possible to see her and not suffer petrifaction.

It is rumored that her blood can reanimate the dead or be a lethal poison.

Snaky Hair Venom:  When making a Snaky Hair attack, Medusa can inject debilitating poison into the opponent as a 2 SP stunt, resulting in a –2 penalty to Dexterity and Defense until the end of the encounter or she receives a heal spell.

Gaze Attack: As a major action, Medusa can make a Gaze attack against an opponent who can see her directly. Her opponent becomes permanently petrified unless she succeeds at a Dexterity check opposed by Medusa’s Magic. If her opponent is fighting Medusa by viewing her reflection or by shutting her eyes, her opponent takes a –1 or –3 to all attacks, respectively.

Tough Hide:  Medusa has magically toughened skin that gives her an Armor Rating of 3.