Sometimes cool things just appear in the inbox. Witness this meta-amazing origami kobold by Joseph Wu. He has folded a kobold.

I love that, and there’s a small Flickr set with more detail. That is all. 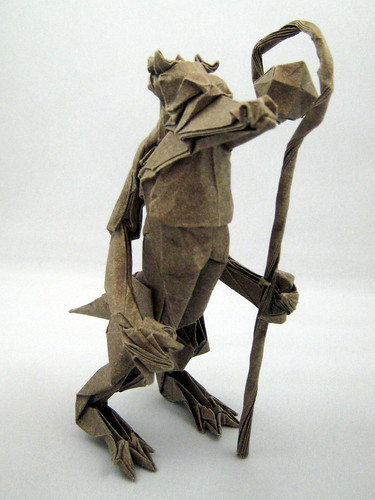 Okay, not quite all. Sometimes other cool things appear in your mailbox; that is, KQ issue #8 has been released. Subscribers should see their PDF copies right away (plus a subscriber bonus item), with the print edition to follow. You can also, naturally, pick up a PDF copy in the store or subscribe today.

The Ecstasy of Ink
by Joshua Stevens
A strange new school of magic, for scribes and scribblers

Horrors from the 5th Dimension
by Tim Connors
Extradimensional entertainment… And terror.

Legends of the Golem
by Ross Byers
The breath of life, or an illusion of creation?

The Brutal Honor of R.A. Salvatore
Words from the master of fast and furious storytelling.

Medieval Medicine
by Phillip Larwood
How did medieval doctors cure their patients?

Smarter than the Average Sword
by John E. Ling

Traps of the Mind
by Maurice deMare

The Flagellant
by Derek Kagemann

Maps of Fantasy: The Frostrift Oracle
by Paul Leach

The Free City: Cults of Zobeck
by Wolfgang Baur