Skip to content
Home / Delve into the Depths in the Kobold Blog / Grand Duchy: Sails of the Nieder Strait 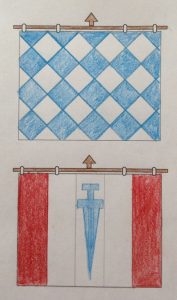 “A dragon-prowed longship appeared over the swells bearing down shortly after sunset. Was it a raider from the Northlands? She stayed with us, yet we only saw her in profile by moonlight. In the morning, though, the lookout reported the pattern of her sail, two bold green stripes on her sides, Donar’s gold hammer on a field of white at the center. They were a crown ship of Donnermark, one of Yorick Hakonsson’s own fleet. We signaled them and shouted welcome as they drew near. Our escort had arrived!”

Like a banner’s crest or a shield’s heraldry, the ships of Grand Duchy ports have distinctive sails, colors, and emblems.

The ships in service to the great cities bear designs that recall their royal crests (Midgard Campaign Setting Guide, pages 194-199)—for example, Bad Solitz’s lightning bolt dividing a field of midnight or Hirschberg’s crossed swords on a patchwork of white and red. (1)

But the masters of cargo and passenger ships that call the ports of Gemport, Donnermark, and Brinestrassen home also unfurl sails with distinctive patterns. The sails of wool stripes or quilted diamonds are dyed and assembled so that whether they power sturdy, rudder-steered cogs or broad, swift knorrs, they are readily recognized.

It’s a rare ship captain who is willing to undertake the perilous crossings of the Nieder Strait in defiance of Northlands raiders or voyage to lonely shores and explore them. But those that set off under these sails are known to make themselves available for hire by adventurers.

Here are descriptions of those captains and their patterned sails (along with colored sketches of what these sails look like): 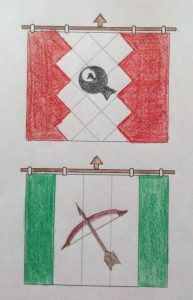 Huginn Soaring. This cog of dark wood was constructed by tengu shipwrights. Her sails boast a black bird on white, braced by red stripes with serrated teeth. Jutka, an elf-marked female and a daughter of Bad Solitz, is her captain. A smuggler at heart (and practice), Jutka orders the Huginn Soaring to hug the coast for hiding places, where she knows every inlet and cove. Her home berth is Gemport, but one she always leaves under the cover of darkness.

Green Widow. Captain Olavo Erina, a male elf of Donnermark, is captain of this knorr of Northlander design. The Green Widow’s sails feature a bow and arrow on white, banked by green stripes. Erina is a flamboyant personality, whose speech is decorated with flowery language and whose clothes are as colorful as a garden in bloom. The crew believes their ship is blessed by a woodland spirit, that of druid who inhabited the tree from which the ship’s planks are constructed. 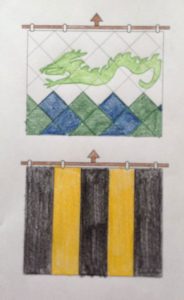 Mistress Sophia. The flagship of the Rexthathus shipping fleet is a cog under the command of Siofra Rexthathus, a female elf. Like all the ships of the cargo line, they sail out of Brinestrassen and have the same distinctive sail, a green lindworm skimming across blue-green waves. Rexthathus ships pride themselves on rebuffing pirates; no ship leaves port with fewer than six marines and armaments.

Pride of Donnermark. This sleek, oar-powered longship is under the command of Ragnild, a female human and first-generation immigrant from the Stannasgard. The Pride’s sails are alternating black and maize. Ragnild is a fierce, aggressive warrior, who won’t hesitate to go “a-viking” when times get tough. Donnermark considers the Pride a licensed privateer, but in truth, Ragnild does no one’s bidding but her own. 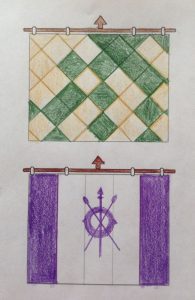 Baby Matilda. The knorr was one of two ships constructed at the same time at the Donnermark yards, with the Baby Matilda being shorter than her sister ship by the length of a man’s stride. The other ship has long years ago been lost at sea, but the Baby Matilda endured, though has had many owners. Her current master is Mauritz Thatcher, a roofer who fell in love with the sea after going on a trading voyage for raw materials. He makes supply runs under a sail that is a patchwork of green and ivory.

Wotan’s Watchful Eye. Dierk Starsguide is a prudent captain. But the male elf is mindful of superstitions and old sea lore, always looking for omens and making decisions based on his interpretations of these signs—sometimes to the consternation to the crew. Strangely, even though he pilots Wotan’s Watchful Eye on such whimsy, he always seems to guide the cog into their Brinestrassen berth in one piece. The sails have the sign of Wotan’s shield and spears on white, braced by purple stripes.

Mermaid’s Sparkle. If there’s one captain who won’t hesitate to venture into uncharted waters, it’s Hljmar Waveskipper, a male halfling captain. The knorr, entirely crewed by halflings, departs from Gemport under a sail made of blue and white diamonds. The ship has a reputation for speed.

Lady’s Blade. This cog is the current ship under the command of “unsinkable” Petrine Larentile, a female elf from Donnermark. While Petrine is considered “unsinkable,” her ships are not. This is the seventh ship she’s served on as an officer, including four under her command. All the previous ones have gone down. The Lady’s Blade has a sail with a downthrust sword on white with red bars.

(1) Just as attempts to produce a cogent political map of the Grand Duchy turned even the most accomplished cartographers to jelly, no one has successfully compiled a catalog of sail designs for her majesty, the Beloved Imperatrix. Shipping companies change hands, go broke or are created, heirs of noble fortunes alter existing designs and more than a few unscrupulous ship’s masters—and smugglers—sail under copycat—or only subtly different—designs intended to confuse rivals, port masters, and lighthouse captains.