Skip to content
Home / Delve into the Depths in the Kobold Blog / Monsters of the Greek Heroic Age: Graeae 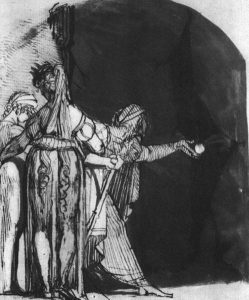 The Graeae await you beyond the jump.

The Graeae, or “gray ones,” are three sisters who share but one eye and one tooth among them. Crones and sisters to the Gorgons, their names are Deino (dread), Enyo (horror), and Pemphredo (alarm). Although they are effectively blind and toothless, they are blessed with great knowledge. Rumors state that the Graeae are as beautiful as young swans, but unfortunately for those of a more passionate leaning, those rumors are false.

Due to the encyclopedic knowledge that the Graeae possess, many heroes on a quest attempt to find them, but they are well hidden in their cave lair.

Graeae are noncombatants, expecting that the usefulness of their knowledge will protect them from murderers.