Skip to content
Home / Delve into the Depths in the Kobold Blog / Monday Monster: The Lambton Worm

County Durham, England (WKQ News): In the rainy north of England, cryptozoologists and big game hunters alike are gripped with frenzied excitement. The cause? Reports of a giant worm-like creature once more haunting the River Wear. Alongside the reporters, photographers, and gawpers are representatives of the Bishop of Sockburn who arrived armed with a traditional worm-slaying blade, and the Earl of Lambton himself — last descendent of the family which first fought these titanic beasts. 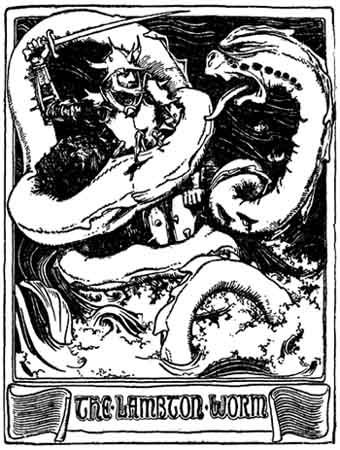 Long ago in the village of Lambton beside the River Wear, the heir to the Lambton estate was an impious youth named John. Young master John decided that one Sunday morning was too fine to waste in church, and so he stole off to the riverside for a spot of fishing instead of prayer. On the way he met the village wise woman, who warned him that no good would come of his impiety.

John laughed at her warning but all he caught that day was a tiny black worm, no bigger than a finger in length, which curled and wriggled on his hook. It looked a bit like an eel and a bit like a leech, but was not quite either.

“That worm is your misdeed,” the old woman said. “Now you must carry it with you and live with the consequences.” [More…]

The strange worm was such an ugly thing that soon John couldn’t stand its presence and, disgusted, he threw it down a nearby well. A few months later, John received his knightly spurs and went questing for Jerusalem. He forgot all about the vile little creature and the wise woman’s warning.

The worm survived the fall into the well. It ate the slime and mold from the walls, grew fat on frogspawn, dead birds, and other carrion. It grew quickly, and when the contents of the well could no longer sate its hunger it climbed out by night in search of food. At first it hunted rabbits and hares, then cats and piglets and sheep, and finally it grew large enough to sieze man-sized prey. The villagers of Lambton learned to shun the riverside between dusk and dawn, and they prayed for deliverance from the curse. The misdeed of young John Lambton was not so easily expunged.

The Worm’s Rampage
This feorful worm would often feed
On caalves an’ lambs an’ sheep,
An’ swally little bairns alive
When they laid doon te sleep.

– Song of the Lambton Worm

The worm grew ever bigger. It tore open cows’ udders to drink their milk and devoured anyone who dared to travel the river Wear. It grew far too large to slither back into the well and so it laired on a nearby hill, coiling around it so tightly that it ploughed furrows in the turf. So deep were these marks that they remain visible to this very day, at a place still called Worm Hill.

The worm plagued Lambton for seven years, and neither soldier nor priest could overcome its crushing coils. Many heroes sought out the worm and some cut it with swords and axes. After each blow the worm’s severed parts would rejoin themselves and it would crush the life from its attacker. All of County Durham cried out in woe that the devil himself had come to plague them.

The Heir Returns
The news ov this myest aaful worm
An’ his queer gannins on
Seun crossed the seas, gat te the ears
Ov brave an’ bowld Sor John.
– Song of the Lambton Worm

Tales of the terrible Lambton Worm travelled all the way to the Holy Land, where they reached the ears of John Lambton, now a brave and pious knight. Sir John resolved to return home and put an end to its rampage. On the journey he heard grim tales of others who had fought it and been bested, and so he sought out the wise woman who had warned him of the worm long ago.

“You alone can kill the beast,” she said. “But only if you follow this advice: First, go to the blacksmith of Lambton, and tell him to weld three dozen spearheads onto your armor, to protect you from the coils of the beast. Second, you must fight the worm in the river Wear so that as you slice its body up, each piece will be carried away by the current and not be able to reattach itself. Third, you must tell the servants of Lambton Hall to release your favorite hound as soon as the worm is dead, for in its death throes it will lay a terrible geas on you, condemning you to kill the first loved one you see. Heed these words, and victory and fame will surely follow.”

Forewarned, Sir John returned to Lambton Hall. He bade its blacksmith add the spearheads to his armor and arranged to sound a hunting horn as soon as the worm was dead, so that the servants would release his most faithful hound to meet him. That night Sir John prayed in the chapel and sharpened his sword, and in the morning he set out to do battle.

Knight and Worm Clash
On a rock in the river, worm and knight engaged in furious combat — John hacking and slicing with his crusader sword, the worm trying to throw coil after coil around him, yet driving the spikes on Sir John’s armor deep into its own slimy flesh. The creature recoiled in pain. Protected from its crushing coils, the knight cleaved the worm into bloody chunks, and one by one the current swept them downstream. The battle was long, but eventually the Lambton Worm was no more.

Alas, Sir John was so fatigued by his victory that he had no breath left with which to sound his hunting horn. Hearing no signal, the servants of Lambton Hall did not release the dog until after John’s father had set off down to the river to see what had become of his son. It was his father and not the hound that was the first loved one the knight saw after killing the worm, but John defied the geas and instead killed his loyal dog when it arrived just moments later. Because of this the next nine generations of Lambtons were cursed to perish through misadventure. Not one of them died peacefully in bed, Sir John included, but his deed still earned him fame and fortune, just as the wise woman had promised.

In Your Game
The Lambton Worm is more than just another monster tearing up the countryside. It’s the living embodiment of a wicked deed, and to permanently vanquish it requires rectifying the action that spawned it, not just attacking its physical form.

Although Sir John defeated his worm, many slithering monsters plagued England in those days. Reports of similar creatures at nearby Penlaw Hill and Sockburn, and later in Linton and Bamborough, lead many to suspect that the severed parts of the Lambton beast, carried off by the river during Sir John’s fight, came to rest in other places and grew into fresh incarnations of the worm.

In Your Modern Game
The Lambton Worm story is well known in northern England, immortalized in song and countless storybooks and pantomimes. Modern adventurers looking for more accurate information should seek out Lambton Castle in county Durham, for its library contains a first hand account of the beast, written by Sir John himself. They could also visit the bishop of Sockburn, who among his regalia keeps a 12th-century falchion said to have been used to kill a similar worm.

The true origin of the Lambton Worm depends on the style of your campaign. They could be literal agents of the devil, results of genetic engineering gone arry, cryptids like the Mongolian death worm or European tatzelwurm, or even a giant ragworm or other large invertebrate that’s somehow survived from the depths of prehistory.

In Your Fantasy Game
When a wicked deed is done the forces of evil sometimes send an agent into the world to wreak further havoc. If the one responsible for the deed is virtuous or destined for great things, the lords of darkness delight in sending a Lambton Worm to lay waste to the sinner’s home and eventually devour him.

Since the worm is sent by infernal forces, they might aid it directly with a retinue of evil outsiders. These create even more destruction and tempt terrified victims into further sin.

Huge Immortal Beast XP 6,000
Initiative +12 Senses Perception +16; Darkvision
Stinking Slime aura 1; Living enemies within the aura take a -2 penalty to attack rolls. Squares adjacent to the worm are considered Difficult Terrain.
HP 740; Bloodied 370
Regeneration 10 (if the worm takes fire or radiant damage its regeneration does not function until the end of its next turn).
AC 29; Fortitude 35, Reflex 34, Will 31
Speed 7, swim 6
Action Points 2

The Lambton Worm can take an additional standard action each turn, as per the rules for Solo monsters.

Melee: Crushing Coils (Standard; at will)
Reach 3, +17 versus Ref; 3d6+6 damage, plus the target is grabbed (until escape). The worm can have up to two characters grabbed at once.

Death Geas (Encounter; immediate reaction upon death) * Charm
Close Burst 20; +15 versus will. Victims hear a constant whispering, urging them to commit evil deeds. They lose 1 healing surge until the curse is broken or they commit an appropriate evil act. The curse can be broken by performing an ancient ritual found with a ‘Discover Secret Lore’ skill challenge. Failure results in the loss of an additional Healing Surge.

Lampton Worms are agents of evil, sent into the world after a good person commits a wicked deed. Named after the village where they were first encountered, these ugly worms have voracious appetites and grow in size with every meal.

LAMBTON WORM LORE
A character knows the following with a successful History or Arcana check:

DC 20 Lambton Worms are immortal beasts sent into the world when an evil deed is done. They prefer watery environments, and like to crush their enemies to death.

DC 25 They are covered in toxic slime and can vomit a stream of poison onto attackers. They inflict a curse on whoever slays them.

DC 30 They are vulnerable to fire and Radiant attacks.

LAMBTON WORM TACTICS
The Worm usually opens with its Thrashing Tail, scattering attackers while it concentrates on getting a victim within its coils. It uses its bite attack to prevent its target’s companions from aiding him. Especially troublesome foes receive its Vomitous Blast.

ENCOUNTER GROUPS
Lambton Worms are typically encountered alone, as they crush and devour anything that comes within reach. As agents of evil however, they are sometimes encountered with supernatural allies.

Got your own hook for the worm? Or just want to see the 3rd Edition stats? Visit the Forum.